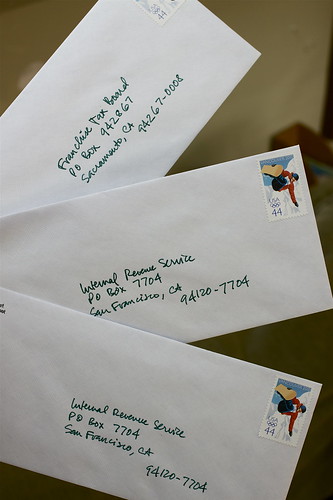 All the same-sex married folk in Iowa, Vermont, New Hampshire, Massachusetts, Conneticut, the District of Columbia are sending in one state form and two federal forms today. Â Folks in New York and Maryland are also recognized at the state level, wherever they got hitched, so them, too.

Here in the Golden State, we got 18,000 in-state recognized same-sex married folk (those that rushed up the gang plank between June 16 and November 5, 2008, before it got yanked up), plus Registered Domestic Partners, who, as of 2007, were granted the right to file state taxes jointly.

Add to this anyone else same-sex coupled who got legally married anywhere else BEFORE NOVEMBER 5, 2008. Â When the gang plank got yanked up, it left you on the dock, too. Sorry. Â Pre-election day 2008 recognitions do include happy unions in the Netherlands, Belgium, Spain, Canada, Norway, Sweden, and South Africa (except I don’t know when each of those countries legally recognized our partnerships; some could well have been after November 5, 2008 in which case yer SOL).

Nepal and Portugal, thank you, but your recognitions will be too late for CA state residents. The rest of you-all’s, if you’re now in-state residents, you get to file one state form, too. Â Yay!

Confused? Move to Nevada! Or get yourself a nice, queer, tax preparer. We did.

I haven’t counted up all the gay coupled folk in every state of the union that has no partner recognition, some kind of state-level “Defense” of (Heterosexual) Marriage Act, Â otherwise known as hell NO we aren’t recognizing you people, no way, no how! Even if some reasonable-thinking person in another state did!

All of us in every state of the union, thanks to the federalÂ Defense of Marriage Act, signed by President Clinton in 1996? Â Two federal forms! Â (Here’s your ever-updated Relationship Recognition map, from NGLTF. Current iteration: March 17, 2010!) The patchwork quilt of piecemeal equality.

If you’re inspired to follow up on how much all this fun costs us, check out the piece that ran in The New York Times last October: The High Price of Being a Gay Couple.

9 thoughts on “Fun with gay taxes”