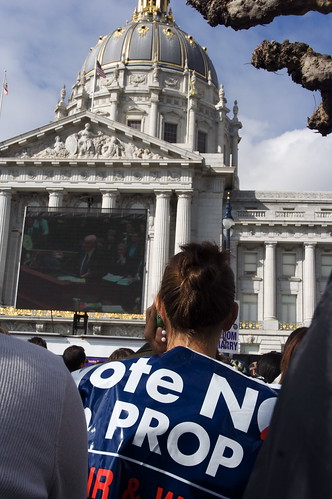 This is a place-holder for an upcoming slap-dash photo essay about my morning at the Prop 8 arguments JumboTron, complete with hastily contrived notation. Aforementioned photo essay currently in process.

This is the closest I’ll get to live blogging anything, unless you consider retroactive editing for word choice & clarity after I’ve posted something “live blogging,” which I fear most people wouldn’t. They’d think it was cheating. But I sez, I’ve warned everyone about my Walt Whitmanesque tendencies in my About page, thereby tagging the “truth in advertising” base.

But of all the images of the morning (yet forthcoming), this may be as descriptive as any. Out in San Francisco’s Civic Center Plaza, watching the oral arguments in the case challenging the constitutionality of Proposition 8, we all witnessed many things. And no, I refer not to Justice Kennard’s misunderstanding that the proceedings were designed to be a platform for her, the whole her, and nothing but the her, so help her her God. (oops! did I let that slip out?)

No, three of the strongest impressions, to my mind, were of: (1) an abidingly acerbic contention between the two sides of the matter, with a middle ground extremely hard to make out; (2) a breathtakingly thrilling commitment, on the part of we assembled, to the grandeur of the various founding principles of justice upon which our CONSTITUTIONAL democracy has been founded; and (3) the truth that sooner or later, these young people — who were out in droves — will be not just voters, but movers and shakers (even more than they are now), and they will not for a minute tolerate shennanigans the likes of which have been distracting us over this marriage inequality shite. As I’ve said before, ’cause it’s a few degrees more true every day, they’ll have bigger fish to fry, because the fish, they’ll be a frying.

[Later this same day: a slap-dash, hastily notated photo essay of the morning.]

One thought on “Hello? Past? It’s the future calling.”