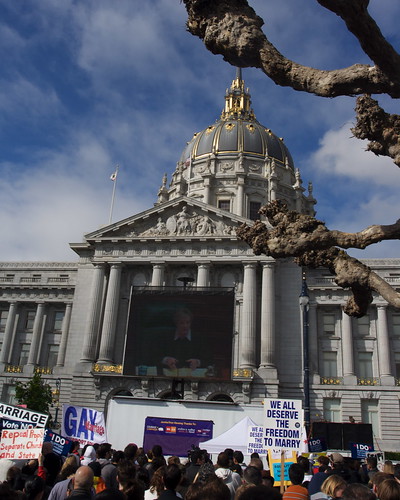 In which we see a bunch of pictures and slap-dash commentary, in the small sandwich of time I have before my childcare ends.

First off, look at that JumboTron, will ya? And do you like the fascinating simulacrum effect of the imagery of justice (or the pursuit of it), superimposed on the front of City Hall? This is the future and there it is, 20′ x 30′ or whatever. 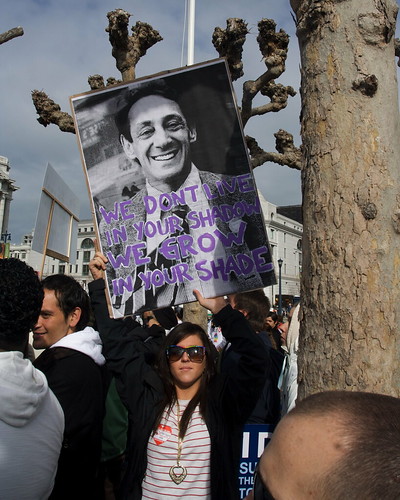 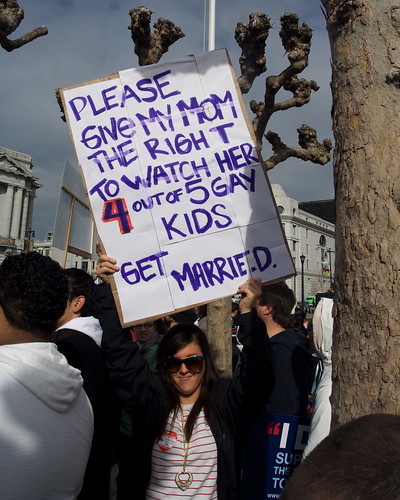 This gal had a fabulous two part sign. What’s not to like about a youngster walking around with a big poster of Harvey Milk, who was assassinated long before she was even born (“We don’t walk in your shadow, we grow in your shade.”) Now look at the flip side. (“Please give my mom the right to watch her 4 out of 5 gay kids get married.”) Sweet, eh? And look at that wonderful smile. You can’t see it, but that’s a piercing on her lip. And yes, we all have no idea which of the five she is. Part of the wonderfulness that is the future of our great nation. 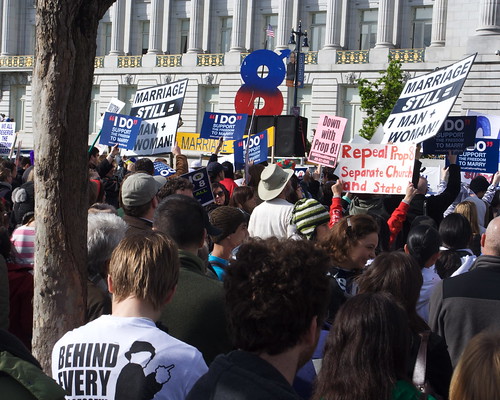 It was a freakin’ zoo there. And this was the calm locale. We were facing City Hall, watching the JumboTron and frequently breaking out into applause, etc. Over in front of the state Court House, the Yes on 8 crowd had clumped, in order to provide the exiting attorneys lots of, mmm. What’s the best thing to call it? Yes: harassment. With more time, I could do a specific series on the MARRIAGE STILL = 1 MAN + 1 WOMAN sign, and the evolving drama of folks holding counter signs in front of it. (See it, big & black & white, to the left there?). Eventually the hetero math sign holder got it hoisted on two wooden sticks, ostensibly making the logic of his point unassailable by virtue of its height. (VoilÃ¡ the sign before makeoverÂ and after.) 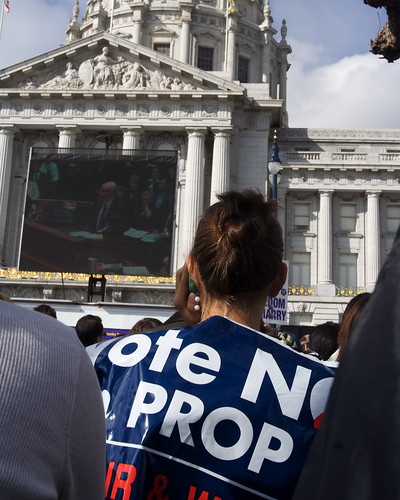 The future lies in good hands, and the hands are on a cell phone. I was near a clump of folks, college age, and most, by my eye, I would guess were heterosexual allies. They were in good cheer, unlike me, who was often sick to my stomach listening to the amount of time Justice Kennard interrupted the attorneys attempting to argue the unconstitutionality of the proposition. When the JumboTron flickered out for a moment, they offered “What do we want? JumboTron? When do we want it? Now!”

But a bunch of their group came over after having spent some time in the Yes on 8 hornet’s nest a block away. They said, “We were teaching them the bible. We totally knew passages better than they did.” Like I said, the future’s in good hands. 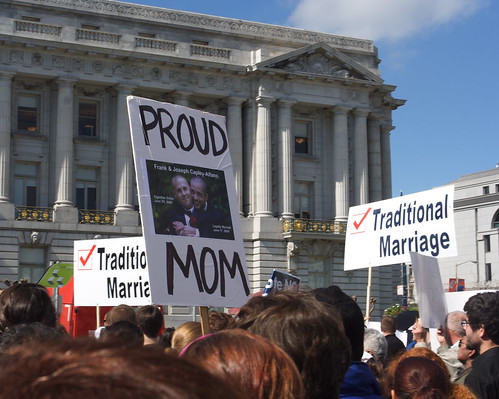 Proud mom, sandwiched between factions who want her son to be divorced. You know, because they care about marraige. Go, mom. Â Another favorite sign, for me: “Jesus had two dads, why can’t I?” Â I also liked this one held by someone from the Progressive Jewish Alliance: “We are the Jewish community: we pray with our feet.” Another sister with her had a t-shirt that read, “To kvetch is human; to act, divine.” 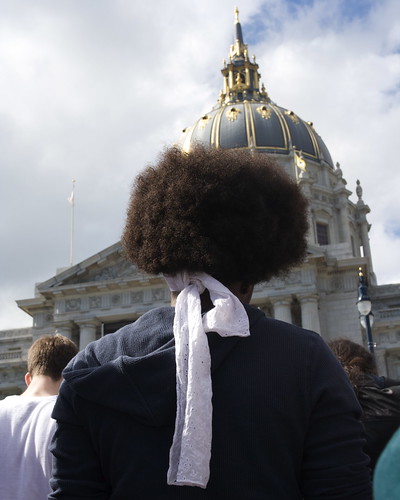 We were to wear white in solidarity. I forgot, but this gal did not. A flair for accessorizing helps. 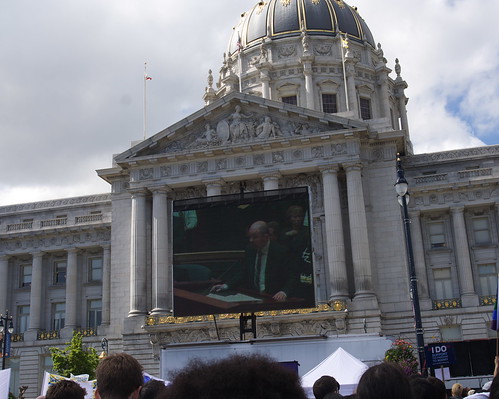 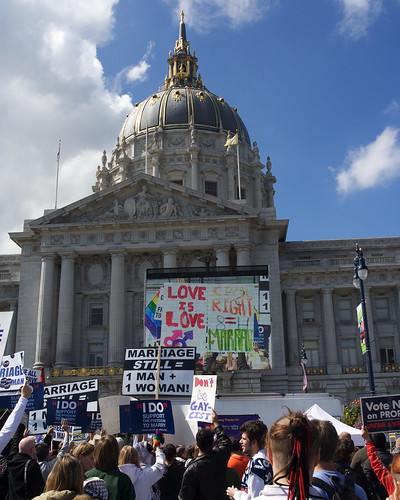 Molly McKay, Media Director of Marriage Equality USA led the crowd in cheers for the attorneys after the arguments closed. (You can’t see here in this, but trust me, she’s there.) She urged us to peacefully mosey over and greet our folks as they exited the courthouse. Not easy, the peaceful part, given the welter of Yes folks chanting / yelling. 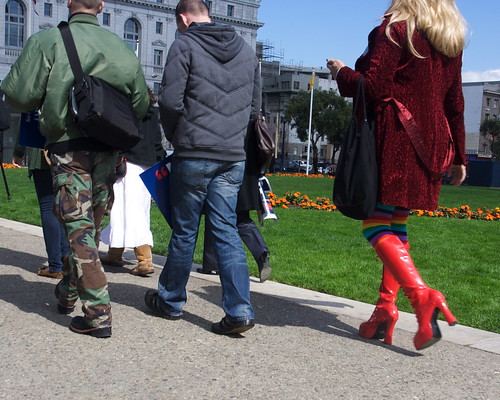 Here we are, traipsing peacefully to the cranky shout-off in front of the court house. One of the affable hetero ally youngsters (yep, it has come to this: college students are now “youngsters” to me) was remarking on the bodaciousness of the red boots (shown above), and claiming he’d love to have come to the event in them. I got the impression he didn’t have much practice walking in equipment like that, and I told him, Brother, that is not for the faint of heart! Then I pointed to my excessively sensible shoes. 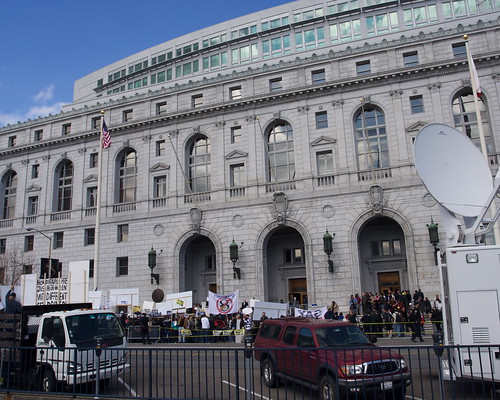 Melee. Basically. Take my word for it, since my lack of telephoto gives you little sense except that yes, the PROTECT TRADITIONAL MARRIAGE signs were about the dimension of a twin-sized bed. Â Just in case one might think they didn’t feel strongly about the matter. Â One word came to mind, as “No on 8” / “Yes on 8” chants were competing for every spare inch in the brain: Babel.

I was glad there was no more space on that side of the street. Â [Get a load of the view from the courthouse steps, at the top of the NYT article on the day.] Still, I could hear some of the inspirational verbiage from our folks at the podium. Attorney Gloria Allred, flanked by her clients Robin Tyler and Diane Olson, said to the Yes folks attempting to drown her out: “We don’t believe an amendment can do away with your free speech, and we don’t believe an amendment to the constitution can do away with the right of gays and lesbians to marry.” Â Allright then, sister. She closed with the forward-thinking: “We will win, whether it’s in the courts, the legislature, or in the court of public opinion.”Â

Again, Tom Ammiano cheered everyone up (you got to love a stand-up comedian who runs for office and wins). “You can’t drown out a big queen,” he called out. “The future is ours, boys and girls, the future is ours.” I tend to agree. Just don’t know how near or distant. 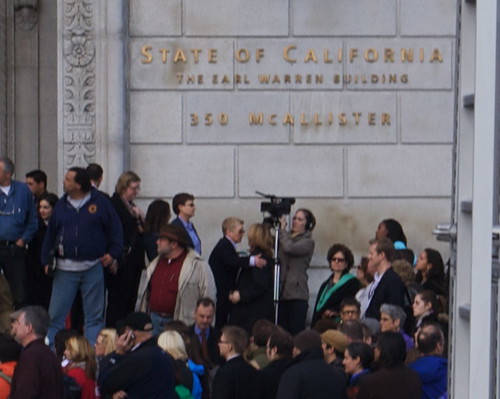 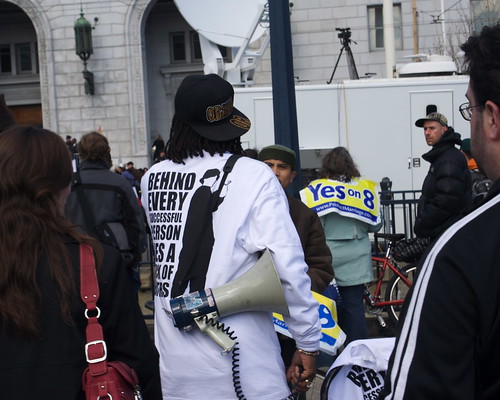 This chap’s T-shirt read: “Behind every successful person lies a pack of haters.” You can’t make it out, but the figure on it is flipping the bird. Â Man, he sold a ton of those that morning. Um, to our side. Â He was inspirationally chipper (“You people got to stop drinking that hatorade!” he called out to the cranky Yes folk.) Here, he was schooling one such hater on the specifics of where God was. Â Everywhere, was basically his argument. Â He walked away saying “Case closed! Case closed!” And at least to my mind, it was.

Now if only he could have trot around Civic Center and similarly schooled the driver of the homo-hate mobile. This vehicle had to have chewed up at least a half a tank of gas, as it slowly encircled the plaza all morning long. Â A truck whose sole purpose was to declare the sin (oops: the SIN!) of homosexuality, complete with an enormous photo of two men kissing, with a circle/slash garland around it, various biblical passages highlit for our edification. The words HOMOSEXUALITY IS A SIN lovingly painted, each word its own rainbow, across the side in foot-high letters. Lord, the time this man spent decorating this vehicle. More time than I ever spent cleaning my parents’ cars in all my high school years, combined. More like, the amount of time a really, really good LGBT Pride float takes. I can only imagine he thought it was an ark. I can also only imagine the charge he gets looking at the 5 foot tall photo of the man-on-man kiss. 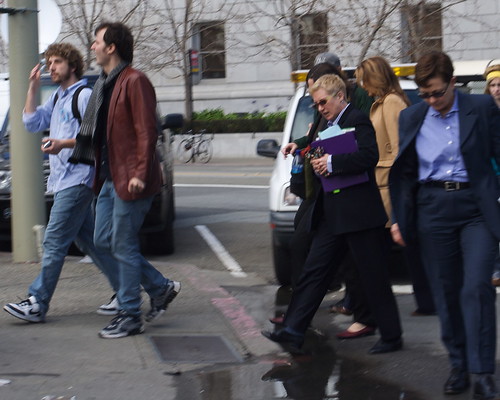 Here’s our shero Therese Stewart hopping over a puddle that a troup of plad skirt-clad parochial schoolgirls had only moments before hopped over (they were scenic and photogenic, but also kids, so alas, no pics.) Â Why a puddle-jumping shot? I dunno, why not? Â Would that the recalcitrant end of the supreme court were as easily surmountable. 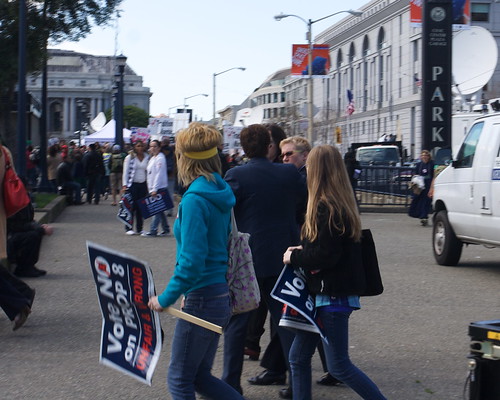 And here’s what I liked most: look at these young gals in the foreground looking on at Ms. Stewart there. They had just finished watching this woman’s face plastered on the 20′ x 30′ JumboTron, and even if they didn’t follow every nuance of her razor-sharp argument (fantastic point-by-point summary at the NCLR blog here, in reverse order most recent back to the beginning, 27-odd concise post-lets), they heard the crowd around them cheer her points loudly. Â I just like thinking about what that moment might have been like for them. Â They totally could grow up to be like her. Â I got your PowerPuff Grrl power riiiiiight here, sisters, and it’s real. Â And it’s a dyke with close-cropped hair and sensible shoes. Â And a brain that deserves to one day be sitting up on the Supreme Court, man.

Parting thoughts: brace for inclement weather, people. Â Justice Joyce Kennard: buzz kill par excellence. Â Severe case of interruptitis. Man I’d hate to be at a dinner party with her. I am lining up lots of people I don’t want to be in social situations with. Â Least favorite elevator ride would include her and No on 8 consultant Steve Smith.

Christopher Krueger, from the Attorney General’s office? Â Oh where do we start. I think I’d almost rather have had Bobby Jindal up there arguing for us. Â Yes, I said that. Â De-ba-cle. Debacle. A splat of Jindalian proportion. Â (Splat: opera singer for when you don’t hit your high note.) I hate AG Jerry Brown’s guts for sending this clown in there (that was a song! not a legal strategy!) Will not vote for that man for kaka. Coward shoulda been in there himself if he believed what he said he did. (Hey, LD, let us know what you really think!)

Now I think the whole thing was a cynical political calculation on the part of the future gubernatorial candidate. Hope I’m wrong. But the AG argument undercut everyone else’s, and then when he was to make his point (you know: the reason undercutting the revision vs. argument argument was going to be justified?), he was all “Um” and “You know” and I swear I didn’t hear him cite one precedent. Â Seriously. Â Whatever water that argument held before he went in there is now all over the floor. Â That he went last? Again: de-ba-cle. He was terrible enough as to have been forgettable, but unfortunately, batting last, he remains memorably regrettable. Â Kaka poo poo, basically, is my most articulate response to him. Â But hey. I’m a jurisprudential neophyte.