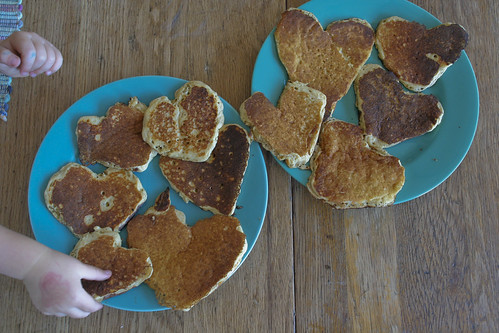 Pancake hearts, made as antidote to Prop 8 hate, mid-campaign.

After my mom died (now over fifteen years ago), I was thrust into that heightened state of awareness one has in the wake of the death of someone close.  The world carries on as if nothing’s changed, except you’re rocked to your core.  You see pettiness as petty, because it is. You see the preoccupation with anything other than love and compassion to be misguided at best, destructive at worst. You know how short life is.  I was aware of, and tried to hold tight onto, an accute sense of what really matters.  It’s the single most powerful gift the dead give the living.

In the year following my mother’s death, I asked the dieties for a ten year reprieve on loss, and I was dazzlingly fortunate to have received it.  I was given a decade during which to lick wounds, to breathe deep, to consider love again, to readjust to a world moved by something else besides my mother’s centrifugal force.  Ten years during which to see what was left of her (the essence of her love), and what really would slip away (the memory of her voice).

A dozen years after my mother died (six weeks after my daughter was born), a close friend died in an accident.  Six months after that my ten-year-old nephew died, following a short, intense battle with brain and spinal cord cancer.   These two died not just younger than I expected (as did my mother), but relatively young, or just young, period.  Really young.  With their leave-takings, my awareness of what really matters became not just a gift from the dead to me, but my gift to the dead in my life.  I couldn’t keep from thinking: what can I give them?  That they can have left something here, when they left their lives.  And the simple answer was: gratitude.

My challenge was to hold on to that insight. Come what may.

I am awash in middle class, able-bodied, family-bless’d, white skin privilege.  It’s my ocean and I’m a fish in it, utterly unaware of its existence most minutes of the day.  But what I’ve been made excruciatingly aware of, in the past five months, was what it would feel like to add another privilege/blessing/thing to be grateful for — legal recognition of my family — and then lose it.  Its loss, and the very very ugly means by which it was taken — through a fog of lies, with a stream of whispers and shouts to the worse angels of everyone’s natures, over the protestations of our very constitution —  made it easy to lose a sense of relative blessing.

The not having, and then the finally having, and then the fighting for, and then the losing.  This is one way in which this particular battle for this particular civil right (and it is civil, and it should be regarded as a right) has been brain-twisting for those of us inside it.  It has challenged the greater sense of gratitude I know that I owe the dead in my life, as well as those living around me with any less than I have.  A sense of gratitude I’ve had a clear bead on before.

The thirteenth of the fifty-nine lojong teachings of Tibetan Buddhism is “Be grateful to everyone.”  Everyone.  Buddhist teacher Pema Chödrön has written,

“Be grateful to everyone” means that all situations teach you, and often it’s the rough ones that teach you best.

Conflict and hardship provide a crucible for growth and insight.  So today I am grateful for the opportunity to re-member my gratitude for what I have, to be sure.  But I am also trying to be grateful to those who have recently tried to take away from me what I had, for about six months.  As the most vividly personified adversaries I’ve known, the proponents of Proposition 8 — and my reaction to them — have become my best teachers.

Rarely have I been so tested as I have been during this Prop 8 battle.  Rarely has it been so consistently challenging to locate and hang on to my equilibrium.  Outside of the battle for my nephew’s life, never have I fought for anything I feel so fiercely protective of (my children’s well-being, and their sense that their family is, at base, okay).  It has drawn on, and drawn out, the best and worst of me, and I think most of us would also say it’s done the same to our community.  The incessant, hard work leading up to the election.  Not by everyone — not by enough of us — but still, by so many.  Just enough to come close, and yet not win.  The upwellings of racist acrimony following it, when the now-debunked CNN exit polls about the African American vote on the proposition opened up the vein of vehement racism running persistently just below the surface.  Racist accusations spouted not by everyone, but by just enough to poison, and to remind white gay people how deep it runs, and how very much hard work it will continue to take to be rid of it.

One of the clear lessons to all people interested in the Prop 8 battle is that much, much more communication is needed.  Across racial lines within queer community, and between marriage equality advocates and people in faith communities who, at least this time around, felt strongly that their private religious beliefs really should delimit the public civil rights accorded their neighbors.

This need for more communication is clearer to a great many of us now.  It was clear to Harvey Milk, too, as genderkid reminds us:

Even if gays lose in these initiatives, people are still being educated. Because of Anita Bryant and Dade County, the entire country was educated about homosexuality to a greater extent than ever before. The first step is always hostility, and after that you can sit down and talk about it.

The path of not being caught in ego is a process of surrendering to situations in order to communicate rather than win.

My hope today, and hereafter, is that I might hold on to these insights.  Come what may.