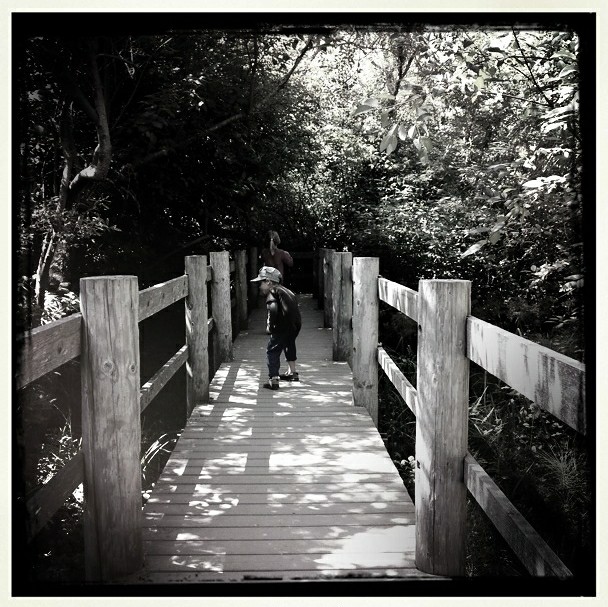 On the bridge to Jewel Lake, Tilden Park, Berkeley, CA.

There was a time in the long ago, back when I began this blog, that I was posting so frequently that I needed to distinguish a weekend post of a picture (which felt a little like cheating) from the copious production that was taking place during the week. Thus, “Weekend bonus shot,” a kind of a blogular lagniappe.

Nowadays, my production here has slowed to such an imperceptible crawl that not only are the few posts I put up these weekend  photos, I managed just now to go weeks on end without even a one of  them! And not just any ol’ weeks, the weeks surrounding LGBT Pride! Our High Holy Days!

It is a tribute to how dadgum  much I’m working, and how woefully it has coincided with a crescendo in the workload of the other parent in the household. I write these words only because her load has lightened just a bit (yet another runaway smash hit musical theater production opened to raves and ovations; all in a day’s work for her).  But my own load is only going to press in even harder in the coming weeks. (I have quipped that we need deep sea divers’ helmets to withstand the pressure at work these days, but I also think, wistfully: How quiet it must be inside one of those things!)

When I’ve posted anything at all, I’ve often chewed over the same thing (clearly it’s taking a while for me to accept): my workload–or my management of it–has winnowed down my discretionary moments to a few. Most of those I choose to spend on my family.  At the same time, my daughter is very clearly growing to be a person who prizes her privacy.  I know enough to know that later she will appreciate my having respected that now, virtually as much as actually.  I have heard the phrase “the internet never forgets” often enough; thought enough about the 13 or 23 year-old her (or friends of her) rummaging around for her earliest digital footprints, and finding these that are of my making.  And my son?  As photophobic as he is photogenic. I could truly make a feature-length slide show of image after image of his hand outstretched and blocking his gorgeous little face. Really, these kids: a mission-driven parenting blogger’s nightmare. Okay, or at least: a quandary.

Related: for at least a year after my mother died, I found the amount of words I was able to share with others had slowed to a trickle. I had to teach in the mornings, as a graduate student instructor, and the first class I came back to teach was a large lecture course (yes, Women’s Studies; how did you guess?). I was spent by noon, but I continued to communicate with photography,  printing picture after picture in the quiet of the campus darkroom. I found an expressiveness that worked for me; I was connecting with and conveying the lives of others, but saving back enough of myself (because I had so little).

I’m trying to sidle up to posting utterly random, non-thematic images here for a while, as a way to at least blow on the embers of this blog ’til I find the time, or the vantage point, or whatever it is I need to revive it in earnest.  To do so is challenging, since I spend so much more time thinking about (and privileging, and mourning) the written reflections I wish I could share about the 1,001 that are happening in the world–my world, my children’s worlds–both large and small. I start blog post after blog post with an opening sentence in my head. And then that’s all I have time for. (Heck, a collection of those would be a post unto itself.)

Here’s Oliver Wendell Holmes, being nearly as lugubrious as me: “Alas for those that never sing/ But die with all their music in them!”

Woe! And also: no! So: let’s see what happens when we let some images to do the singing for a while.