A few observations on the day, in bullet point fashion, so as to encourage a modicum (but only a modicum!) of brevity. And a few pictures, too (hundreds more at Flickr, here). 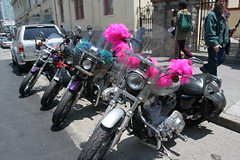 [Above: Just a few of the hundreds of bikes on which dykes led off the parade, hours earlier. More DOB info for the DOB-curious here.] 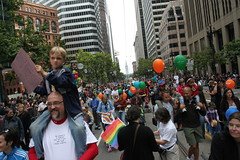 [Above: Sign held aloft by kid read, “I was a witness when my grandmas got married.” Yep, he got a lot of applause. As well he should have.] 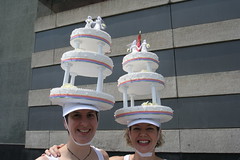 [Above: These gals wore t-shirts reading “Party A” and “Party B,” the lingo CA marriage licenses now use to identify the applicant couples. Also they handed out Hershey’s kisses wrapped with a tag bearing their marriage date and locale (SF City Hall). Nice touch.] 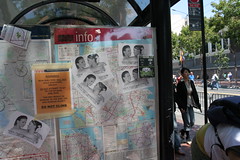 [Above: Bus shelter signage. In yellow-orange: “MUNI shelters will NOT hold additional weight. Do NOT attempt to sit on top of MUNI shelters” etc. Not like it worked that well to keep the human pigeons off. The image of the two gals, on the white flyers (slipped underneath the plastic encasing the map): adverts for pridemakeup.com, “for gay and lesbian weddings.” Ka-ching!] 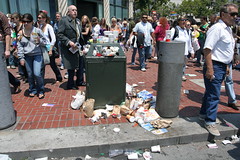 [Above: the unholy and yet natural result of over one million (yep: over one million) folks streaming up a single city street for a big ole event. Full beyond capacity garbage cans at every streetcorner. This image was taken when we were leaving the premises, hours after walking up the street. And the parade was still going on.]

[Above: Half a block-long concatenation of sea creatures, made of baloons. Worn on the persons of otherwise modestly-clad go-go boys. Representing what? I didn’t catch. But this was the single most memorable image of the day. Everywhere we saw any of these balooned folk, later in the day, whether clumped or solo, we’d go: “Sea anemone!” (Photo courtesy of chum Annz.)] 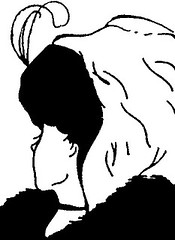 Sixth list of ten: Things I have in common with dads

2 thoughts on “Some Pride grace notes”