Like me, many of you current and future parents perusing yesterday’s New York Times will have sucked up the article “Text Generation Gap: U R 2 Old (JK)” with a mixture of fascination and dread. Laura M. Holson, the article’s author, writes that

Children increasingly rely on personal technological devices like cellphones to define themselves and create social circles apart from their families, changing the way they communicate with their parents.

Holson introduces us to a smattering of parent-kid combos and the ways in which their communication is either foiled or facilitated or both, thanks to the use of cellphones and text messaging. Phone company analyst types share their studies about how many kids will be using cellphones in the near future: 81% of Americans between the ages of 5 and 24.

We are also reminded that every new device we bring into our lives is a Trojan Horse of sorts. 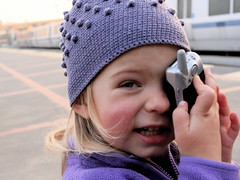 Or, if mixing metaphors is an irresistible pastime of yours, as it is mine, let’s say a Trojan Pandora’s Box. In this little device rolls, nestling itself innocently into pockets and purses, atop chests of drawers and desks and dining tables. Then once it’s well established, out pops the realization that it has changed how we communicate, sometimes for the better, sometimes for the less so. For me, the most unsettling images in the article were those of kids lost in device-mediated conversations to others in the midst of what I would have thought would have been sacrosanct family togetherness times, like eating meals.

I’m sure I go around believing in the concept of sacrosanct family togetherness time (or FTT) because of how young our kids are right now. (You down with FTT? Yeah, you know me!) See, we’re in that rare period in which our kids meet a vast majority of their emotional and social needs inside the immediate family. It’s exhausting, but it’s an amazing thing at the same time. Very little presses into their consciousnesses from the exterior of this tightly governed space — at the moment. These days, when the lil’ monkey talks about her friends at preschool, I know that the friendship she speaks of is a touch more imaginary than real. She describes the Big Dog at school — the one I like to call Canis Major (not her real name) — as her best friend there, but I’m not at all sure Canis would be able to pick our girlie out of a line-up.

If you set aside the five cousins that people her peer group, her little chum across the street (she of Mama and Baba fame) is her primary real-life buddy. They play with each other every week, and monthly they both schmooze with the offspring of the other gals we all met and stayed tight with from our lesbian childbirth education class. But 100% of these interactions are engineered by us right now. There’ll come a time when our kids will not only initiate time with their chums, but they’ll prefer it to time with us. One by one, confidences and issues will be shared and resolved with people other than us. And I’m sure some of that will take place via some handheld device or another. Or at least some measure of the relationship and trust with those people will be developed that-a-way.

I’m a firm believer that any tool — rudimentary or electronic — is as beneficial or as destructive as the person using it. Plus, it’s hard to be a dedicated Luddite when I know that some of the most gratifying written communication I’ve been a part of (this blog) takes place using a tool that’s only about a generation old (the personal computer), which transmits words and images via a route that’s been in widespread use for little more than ten years (the internet), and a medium on that internet that’s even younger (blogs). So rather than cry over spilt lemons, I’d rather make lemonade. And swill that lemonade whilst doing as the Romans do, now that we find ourselves vacationing in Rome for an indefinite period of time. Vets with kids knee-deep in their teen years know all this only too well. Lori Hahn got up the pluck to start her own MySpace account in order to wheedle her way into their kids’ techno-mediated brains.

Who knew I would be foreshadowing last Friday when I mentioned how I needed netlingo to decipher the secret acronym language of the texterati? And yet behold what Holson says:

Text messaging, in particular, has perhaps become this generationâ€™s version of pig Latin… Some acronyms meant to alert children to prying eyes are POS (â€œparent over shoulderâ€), PRW (â€œparents are watchingâ€) and KPC (â€œkeeping parents cluelessâ€).

Still stinging from the truth of it all, yet thinking wistfully of Roman lemonade, I thought it might help to anticipate some of the acronyms that my own moppets might find themselves thumbing into some device (as soon as they learn how to distinguish the letters on said device). Some are simple extensions of the above acronyms, some are customized to suit the unique cultural environment of the “lesfam,” as I like to call it, merrily jumping on the netlinguistic bandwagon (or the lesbian family, for the shortcut-averse).

As with so much of the future, the possibilities are endless.