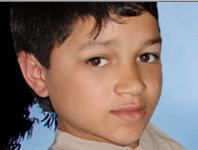 It takes a certain kind of fortitude — a kind I know I lack — to be able to read about the murder of 15 year-old Lawrence King, and not stop in your tracks. In fact, I’ve been stopped in my tracks about it for over a week. For those who aren’t familiar with the story, here’s the gist: Lawrence King was a junior high school kid from Oxnard, CA (roughly 60 miles northwest of Los Angeles, a military/industrial/port town). He was recently “out”as gay, and had begun to come to school wearing articles of feminine clothing and make-up. He had been frequently subject to harassment from other boys at the school but had been, according to his friends, withstanding it without losing his self-respect or conviction.

On Monday last week he was in a lunchtime fight with several boys, including the one who would bring a gun to school with him the following day. At issue was King’s sexual orientation (so say student witnesses). Last Tuesday, in his first period computer class, in front of two dozen other classmates, Lawrence “Larry” King was shot in the head, twice. On Wednesday he was declared brain dead. He was taken off of life support, after his organs were harvested for donation, a week ago today. Brandon McInerney, the 14 year-old shooter, was apprehended later the same morning of the shooting, and currently awaits trial. (The prosecutor is seeking to try him as an adult, under a provision of California law that allows for adult trials for minors who commit serious crimes, but the Transgender Law Project and the National Center for Lesbian Rights oppose his being tried as anything but a child).

A public memorial service for Lawrence King is taking place this afternoon in Port Hueneme, the navy harbor town around which Oxnard wraps. Vigils in his name have been taking place coast-to-coast. The Gay Lesbian and Straight Education Network’s National Day of Silence, on April 25 this year, wil be held in his memory.

You can read more about the story at Pam’s House Blend (and again more recently here), or Republic of T, or at Towelroad, or a ton at The Bilerico Project.

It has been a fatiguing, disheartening experience, reading up on the story to research this post. I’d seen much of the information on harassment in elementary schools before. For instance, one Bilerico piece cited familiar statistics:

A 2004 report called “Safe Place to Learn” from the California Safe School Coalition showed that among all students, LGBT and straight, 27% reported being harassed for some type of gender non-conformity (not being “masculine”or “feminine”enough), and 46% of all students reported that their schools weer not safe for LGBT students.

The familiarity of these findings, however, does not blunt their impact. Same with the litany of LGBT hate crimes listed on the Violence against LGBT people Wikipedia page, linked to from the Wikipedia page on the incident. I’d read about many of the killings before, but of course mostly in the gay press. The murder of Rebecca Wight, out camping with her partner Claudia Brenner in Pennsylvania, has stayed with me since 1988, thereafter haunting what had been a sense of safety from social hatreds in the wilderness. The murders of Roxanne Ellis and Michelle Abdill, in Southern Oregon, has stayed with me since 1995, and colored my sense of safety in the state a big chunk of my extended family grew up in, country I drove through repeatedly as a child en route to family gatherings. That, combined with Mathew Shephard’s murder, pretty much keeps my gender variant ass inside the car whenever we’ve driven through the mountain states. Emphasis on through. I let the femme sweetie go out and pay for the gas and arrange for the lodging, and pull the baseball hat down low.

Director Debra Chasnoff released a statement last week, in which she said,

Ten years ago we released the educational documentary It’s Elementary-Talking About Gay Issues in School and it helped spark a movement to make schools safer places for all children by encouraging K-8 teachers to weave respectful information about LGBT people into their lesson plans. Ironically, this week we are re-releasing this film because it’s time for a new generation of teachers to get on board to ensure that their schools and classrooms are safe for all students, including those like Lawrence King who don’t fit neatly in a box of the stereotype of how boys are supposed to be. We call on all educators in California, and across the nation, to recognize the seriousness of anti-gay bullying and take appropriate steps to ensure the safety and wellbeing of all their students.

Amen. Now I’m waiting for a presidential candidate to say diddly about this.

All of the above mostly makes my stomach churn. It’s an innocent, simplistic thing, but because I can’t begin to imagine doing physical violence to another living creature, I don’t understand others who do. And I can’t imagine the taking of a life. For any reason. I can’t figure how in the hell I will ever be capable of explaining this to my kids, either. I’ve explained death already — our little girl speaks routinely and easily about people (or dogs) who are “spirits” and others who are “not spirits yet” — but I can’t figure how to explain this.

I think about a boy I know and one I know of, each of whom, if ever they find out about this killing, would be likely to go to school with even more fear for their safety. I can’t figure how I’d convince them that their fears are unfounded. Because I’d pretty much agree with them. California has a law, goddamn it, to protect kids exactly like Lawrence King. The California Student Safety and Violence Prevention Act prohibits discrimination and harassment on the basis of sexual orientation or gender identity in California public schools. But such laws (rare, still) are rendered meaningless if the school administration doesn’t wholeheartedly believe in them, doesn’t actively educate its teachers about them and provide them tools and support to enforce them, doesn’t actively promote a culture of tolerance and respect across the entire school community, doesn’t demonstrate, unequivocally, that all harassment is seriously dealt with. Because it affects the core mission of the school: a safe environment in which to learn. And simply, now, a safe environment, period.

And I think of my own boy, and the punishing visions of masculinity he’s growing up into. How will he listen to and nurture anything inside of him that is feminine? How could he possibly, with these stakes? And yet I can’t not do everything I can to preserve space around him in which he can listen to that part of himself. And then pray it doesn’t get him killed.