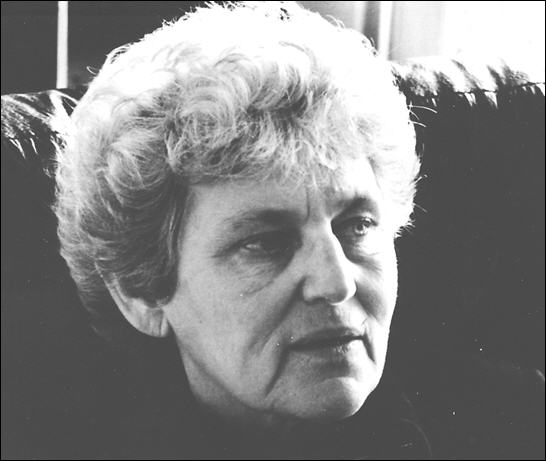 Tillie Olsen’s memorial on Saturday was profoundly moving. What a life; what a legacy. To do any of it justice is far far beyond my humble capacities. So I won’t, except to say that the event was a fitting reflection of her fierce passion for people and for justice. I can’t imagine anyone who could walk away from there uninspired. Below are simply a few anecdotes that have stayed with me from the day.

â€¢ She carried with her everywhere the UN’s Universal Declaration of Human Rights; gave it out like other people give out their business cards. After the memorial, in the adjacent hall where the hundreds of attendees gathered to break bread, scores and scores of the little pamphlets were laid out for us to bring home. I now have one in my wallet and am on the lookout for the first opportunity to pass it along. (Arlene Goldbard notes that yesteday was the anniversary of the passing of Rene Cassin, the author of this document.)

â€¢ She kept a bunch of folded dollar bills handy to give to homeless folks she would encounter (knew everyone in her neighborhood by name, the homeless most especially). When from time to time someone would say to her, upon receiving the bill, “God bless you!” Tillie would reply, “Don’t bless me; curse the system!”

â€¢ Filmmaker Annie Hershey screened a portion of her forthcoming documentary about Tillie, “A Heart in Action.” In it, two young writers were having Olsen sign copies of their books, and one said, “It is such an honor to meet you.” Recoiling at being placed on any kind of pedestal, Tillie responded, “Don’t say ‘honor’!” The young gal quickly came back with, “It’s such a pleasure.” Olsen then smiled and said, “We’re both contributing to the future in a medium I love.”

â€¢ Even toward the end of her life, when Alzheimer’s held so much of her mind hostage, she retained a sense of humor. Whenever one of her grandaughters came to visit, and would ask her “How are you feeling today, Tillie?” she’d reply, “As always, with my hands.”

â€¢ Of the many powerful passages from her works from which her daughters could draw in their eulogies, the passage most frequently cited was this one from “O Yes,” which appears in Tell Me a Riddle:

“It is a long baptism into the seas of humankind, my daughter. Better immersion than to live untouched…”

Read her works; read about her life from the point of view of her daughters, or from scholars, or from journalists, or in her own words; spend some honest time contemplating how you might beat your own path toward love and justice with some of her spirit egging you on. I know I will.

Those wishing to may send donations to the Tillie Olsen Memorial Fund for Public Libraries, Working Class Literature, and Social Justice: