Cathy Renna speaks for many of us in her Bilerico piece today on himÂ (and all those lost to hate violence), when she says, of the police officer who was brought to the scene:

Her words in the Laramie Project – that “the only part of his face not covered in blood were where he had been crying” haunt me to this day.

Everyone for whom his name rings a bell knows he was murdered because he was gay, and his murderers were overwhelmed by their own fear and loathing (of him; of themselves).

For those unfamiliar with his name, you might review the website of the foundation his parents founded in his honor, or the Wikipedia page on him. Â Or the hate crimes bill named after him. Â OrÂ The Laramie Project, the stunning theater piece constructed of testimony by residents of that town, a place known previously only to residents of southeastern Wyoming, and folks traveling east or west along the high plain states. 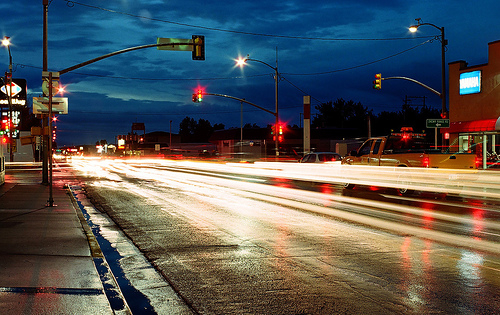 Laramie, Wyoming, by Peter Thody. On his Flickr photoset vambo25.

The beloved and I had no choice but to dine in Laramie once. Â We were on a summertime cross-country road trip, not a year after the murder. Â We had no idea on what fence, exactly, he was found — surely a rural one, and not those lining interstate highway 80. Â But as the beloved drove us closer and closer to town, all I could do was stare out the window in the waning light, and watch the undulating bands of fencing, and wonder, and wonder. Â

My teeth were on edge when we entered town in need of dinner. We chose Applebees, someplace with a lot of cars parked out in front, someplace that looked suitably recognizable, suitably — what was it we were looking for?– Â suitably safe. Â Inside, it was both dark and light at the same time. Â Some kind of color was radiating from somewhere. Â Was it neon, above a salad bar? Â Or a television, above a regular bar? I can’t even remember now.

We were stared at a bit, as usual (okay; I was stared at, the mannish lesbian: that’s who always gets the stares). Â  But what we hadn’t expected was this: the hostess was inordinately kind. Â Inordinately. Â The waitress was extremely gracious. Â Extremely. Â We received more sweet, delicate, tender service that night than we had received since two states to the west of us (and than we would receive again for another two states to the east). Â They smiled warm, genuine smiles.Â

Usually, under circumstances like that, I’m the one who initiates the warmth, trying to find it and draw it out from the other (as if to say: “See? Â There’s a part of you that is ready to feel okay about me and my kind! Â Right there! Â See? Â That’s it! Â Now doesn’t that feel better?”). But that night I was too sick to my stomach to smile first. Â Lo and behold, it was the young waitstaff at Applebees who did.

The young people of Laramie knew we knew about their town before we even drove into it. Â City slickers with out of state written all over them. Â And, it seemed to me, what the hostess and the waitress and even some of the other young folks there taking a second look at us wanted to convey, was this: “Hate put our town on the map. Â But love is going to change it.”

Four weeks today to the election, people. Â Do you really think that the same cord doesn’t stretch between anti-gay hate crimes and anti-gay marriage positions? It may be a long cord, but it’s the same one. Â Now if you haven’t helped out with my No on 8 fundraising thing, would you consider giving even a little? Â Like, the amount of a tip at an Applebee’s dinner, maybe? Â And then please pass it on.

* UPDATED to include text from an urgent email from Geoff Kors, of No on 8:

Today we learned of the massive $25.4 million our opponents have raised so far. They are using this war chest to broadcast lies: 24/7 and up and down the state of California.

And the polls show the lies are working.Â We need your donation now.

People change their minds about Proposition 8 when they hearÂ the lieÂ that churches will lose their tax-free status if they won’t marry same-sex couples — EVEN THOUGH THIS IS NOT TRUE!

So this is crunch time. With less than a month before the election, we must get on the air now to answer these lies and swing votes back to our side.Â

And the ONLY way to do that is to raise more money.Â Â The generous $15.8 million that our supporters have given isn’t enough. Not when the other side has nearly $10 million more than we do and the fundraising gap is growing.

So, how much will you sacrifice to protect your equality or the equality of people you love? It’s that simple.Â Will you give up something, anything, to ensure equality?

I am.Â I’m donating 15% of my incomeÂ to make sure that the No on Prop 8 campaign can answer these lies. Â It’s going to make my life more difficult to make a donation of this size — but I know I have to make this sacrifice to achieve victory on November 4.

What are you willing to give up today so we can protect our communityÂ from this pack of televised lies: A night out? A vacation you had planned? A home improvement project?

I ask you to do what you can.Â Donate to defeat Prop 8.Â Work the phone banks. And urge everyone you know to vote NO on Prop 8.Â

Because if we are not willing to sacrifice, we will not win.

[next in this marraige equality series: Marriage equality and family support]

9 thoughts on “Ten years ago today*”