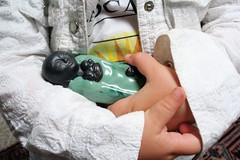 Lilâ€™ Monkeyâ€™s most favorite talisman at the moment is the Jizo Bodhisattva. She has a hard time with the mouthful â€œbodhisattva,â€ and has settled on the misnomer â€œBuddhaâ€; â€œJizoâ€ itself comes out more like â€œJizoo.â€ [Update: “bodhisattva” is now approximated by “bodhi’s office.”] Jizoo Boodah has a swing to it, though, and for this reason, plus Monkeyâ€™s being 1.75 yrs. old, we let her pronunciation stand.

I was given this beautiful statuette from my Mother Out-Law (hereafter MOL), following a meditation retreat sheâ€™d done at Great Vow Monestary in far northwestern Oregon. Jizo means lots of things to lots of peopleâ€”for Wikipedeophiles, their entry focuses on its pan-Asian, pan-Buddhist range of meanings; for bibliophiles, Jan Cozen Bays’ Jizo Bodhisattva was the volume my MOL recommended to me. The thumbnail sketch accompanying the statuette reads:

Jizo figures are placed at crossroads in Japan to guide those who travel in both the spiritual and physical realms. Jizo has special significance to pregnant women and to those whose children have died. Jizo is usually portrayed as a child-monk, often carrying a pilgrim’s ringed staff which jingles to warn animals of his approach and prevent mutual harm. Jizo also carries the wish-fulfilling jewel of the Dharma whose light banishes all fear.

The occasion for this gift was the one-year anniversary of my nephewâ€™s death. (It will be another decade entirely before I can write those two wordsâ€”nephew and deathâ€”in sequence without an involuntary, huge, intake of breath.) Jizo rests on my meditation altar, alongside an old brass Buddah statue that my Christian missionary great-grandmother brought back from China around the turn of the last century (ironic! and true!); a picture of my mother taken by me with my first Brownie camera, circa 1975; a shark keychain my nephew Erik gave me after his Make-A-Wish Foundation trip to Hawai’i; and a small, well-worn piece of the Western or al-Buraq Wall that an old therapist gave me, from her year in Jerusalem.

The E-Z, on-the-ground access of my meditation altar means that the objects on it often find themselves relocated to other spots around the house by the Lilâ€™ Monkey, a neat exersise for me in non-attachment.

The death of a loved one, in stark contrast, is a sprawling, untidy exersise in non-attachment. It possesses the gentleness of a swimming pool bully holding your head underwater while the lifeguard isnâ€™t looking, keeping you down just long enough to rattle the living daylights out of you, but not enough to actually cause you to expire.

Am still working on both lessons, small and large, and expect to for the duration.

The Jizo, talisman of the crossroads, is an apt symbol for my own parenthood, which is marked phenomenally by the crossroads of life and death (and, much more modestly, by the crossroads of biological and nonbiological, female and male parenthood). When Erik was diagnosed with glioblastoma multiforme, on the eve of my beloved’s third trimester, we were a galaxy away from recognizing, much less accepting, what was very, very, very likely to come. But when my oldest and dearest friendâ€™s partner was killed on our daughter’s six-week birthdayâ€”the day we were to have a Welcome to the World party for herâ€”it simply became impossible to not see. Life/death life/death beginning/ending happiness/sorrow blessing/curse bliss/despondancy here/gone tick/tock tick/tock.

When my little one walks around with Jizoo Boodah, when she wraps it lovingly in a blanket of dinner napkins and puts it to sleep in her crib, I worry that itâ€™s a sign that sheâ€™ll go early, too. I mean, why would she attach so strongly to it? Itâ€™s shiny and hard. Then again, when she walks around with nothing whatsoever in her hands I worry that sheâ€™ll go early. My job: to massage this worry so deeply into my tissues that it transforms itself, leaving as its only trace a radiant sheen of gratitude on the surface.