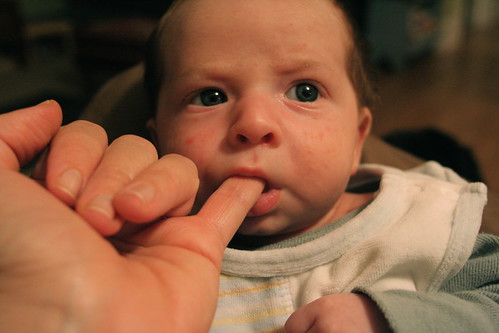 I’m sick, the baby’s sick, the dog’s sick. It looks like the toddler’s en route to getting sick with what I’m trying to kick, which I have because she gave it to me months ago. But worst of all, the computer’s sick! The horror, the horror! ‘Til it’s well again, I’ve had to encamp at a lesser machine, which has greatly hampered the doctoring and online conveying of both prose and photgraphic images. Production will pick up once a dent has been made in any of the above maladies, especially the computer one. Production will also pick up when I can type with more than one hand.

We only have two kids, so my survey sample size is a little skimpy. (Not that this should deter me: when has inadequate data ever stopped anyone from drawing sweeping conclusions about physiology, psychology, and the like?)Â  I’m now ready to say there are two kinds of infants: oral-obsessives, and oral couldn’t care less-ives.Â  In other words, the binkie-bound, and the rest of them.

Just a scant month into his life on the outside and we’re pretty sure that kid#2 is binkie-bound.Â  He’s fussy, he’s agitated, and then you give him the finger.Â  He sets his eyes off in the distance for a moment as he registers what it is, then he pulls it in with the vacuum force of a jet engine’s turbofan. And he’s off a-suckin’ to his heart’s content. Nothing will bother him: not the pokey fingers of the big sister; not the pelting down upon him of spit-up rags, slipping as they inexorably do from our shoulders onto his face; not the flinging of his head hither and thither, like a rear-view window bobble-head doll*, as we feebly try to haul him around through the day’s domestic necessities.

Kid#1 could take or leave the finger; mostly she left it. Not a milk-bearing teat? Not interested. But this guy: he’s clearly going to be a lollipop-sucker, a pencil-nibbler, a toothpick-shredder, and a (let’s hope only bubble-gum) cigar-chewer. Yep, it’s plain to see he’s orally fixated, like his ma. (The beloved has found, strictly based on anecdotal research, that most of her opera singer colleagues are orally fixated; maybe this bodes well for his musical future.)

At first, his pinkie-lovin’ was a thrill. The obvious upside of it is that there’s something related to my body which I can procure and apply, to ease his worried mind. I wasn’t able to provide anything of the sort for the lil’ monkey. Someday when I’ve really lost all sense of decorum I may regale you with the tale of what I did try to do, once — just once! — when I was desparate after an hour-long crying jag and no Mama in sight to calm her. It didn’t work, people. But I had to try. I feel a little awkward about it still, though it does provide a point of positive connection to menfolk who think that if only they could, they would, etc., and all would be well. O, but I’ve said too much already.

Back to Stockholm Syndrome, infant version. Of course the downside of his pinkie-lovin’ is that once the digit is inserted, it’s pretty much stuck there, ’til long after he’s drifted off to sleep. So long as the pinkie’s attached to my hand, and my hand’s attached to me, I’m hostage to him. And yet every pinkie-sucking minute is making me love him more. It’s a pernicious cycle and I don’t see myself doing anything about it anytime soon.

*[Want to shock and amaze your friends? Get them their own bobble-head doll of their kid as a gift! Can this really be possible? See for yourself.]