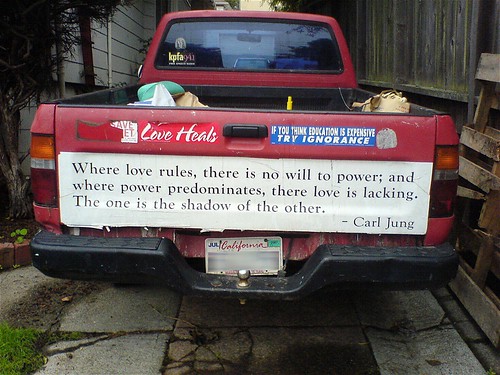 As seen on a bumper in Berkeley, CA.

Thanks today to Dana, at Mombian, for “Seasonal Thoughts on the Evolving Family.” In it, she (as did Liza at LesbianFamily.org a few days back) ruminates on a number of contemporary reports about evolving family structures, both as a result of LGBT families’ boundary-stretching, and because of changing practices on the part of heterosexual folk — delaying or avoiding marriage, becoming single parents by choice, and more. In her piece Dana reminds us of something she’d written about in late September, stats I think all “non-traditional” family folk should know, that

Less than 25% of all American families consist of a married, opposite-sex couple living with their own (biological or adopted) childrenâ€”down from 40% in 1970. (Some of the 15% drop is because of a rise in countable same-sex couples, but not all.)

She goes on to say,

There is a point, moreover, at which these trends impact LGBT rights. One of the reasons voters shot down the amendment to ban domestic partnerships and same-sex marriage in Arizona was that opponents of the ban convinced opposite-sex couples of the constraints the ban would impose on their lives. The more cynical among us may wonder why we should even care about rights for opposite-sex couples, when it is LGBT families that lack equality. My answer is that we have a dual responsibility: creating a world that respects our relationships and families, and creating one that respects those of our children and grandchildren, who may take different paths and form different family structures.

So true. This whole anti-nuke thing (“nuke” here meaning married hetero insular “nuclear” family unit) is way bigger than the self-interest of one LGBT generation. Every glance at the history of the American family across decades and across social classes will show that there have been a great many loving ways to shepherd young people into adulthood, a great many loving ways to assemble into, as Dana boils it down, “a group of individuals bound by love and commitment.”

Her piece also alerts the reader to this essay by Jennifer Gruskoff, one of The Huffington Post’s “Fearless Voices” bloggers. It made me particularly warm and runny, probably because her daughter is treading the Spawn of Lesbians path just a few years ahead of our wee monkey. Gruskoff’s daughter makes a natural choice of love over fear, something I so dearly hope we all succeed in cultivating.