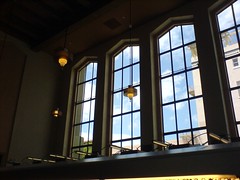 I spent some time yesterday working in the Berkeley Public Library. My mother spent most of her after-school hours there, as a Berkeley High School student in the late 1930s. But before her afternoon at the library began, she went across the street to Edieâ€™s Ice Cream shop and had a sundae. Edieâ€™s closed not long after I returned to the Bay Area after graduate school, but I had many a sundae there in college, thinking of my mother. Now itâ€™s a Peets Coffee shop, and when I went there for some pre-library java, I thought of her again, and the dark wood-panelled booths that filled the place in days of yore.

My mother hid daily in the library, befriended by books, a heavyweight adolescent living, as few of her peers would have, with a divorced mother in an apartment. She was extremely intelligent but equally shy, self-conscious of her size and of the very few dresses she owned. She receiced free violin lessons from the San Francisco Symphonyâ€™s concertmaster, on account of the combination of her high talent and low income.

In the library, when she looked up and out of these vaulted art deco windows, I wonder what she might have wondered about her future. Might she have dreamt of one day enjoying a storied career as a concert violinist? That had been a credible dream of hers, but a rare one for a woman, and a scary one for someone coming from so few resources. I would imagine, too, that she dreamt of college: though her mother had fallen in class status (disowned after marrying a WWI flying ace/mechanic), before the fall she had served as a class president at Mount Holyoke, and was part of a long line of New England college-educated women, the first of which (my sister and I were frequently reminded) was my motherâ€™s great-aunt Sabra Snell, who would have attended Smith in 1850 or 60-something or another. One of my motherâ€™s most oft-repeated refrains was that my sister and I would become the fifth in that multi-generational line. That books would be in our future was a given; which ones, and where, were the only questions.

I wonder: did she think one day sheâ€™d become a mother, maybe even a better (more conventional) mother than the one she knew? We heard no stories of boys she knew in high school, or even young men she might have dated later in college.
Itâ€™s now almost seventy years later. Since her high school afternoons here, she gave up her dreams of becoming a professional violinist, instead attending the University of California at Berkeley, where she received undergraduate and graduate degrees; there she indeed did meet the man who would become the father of her children; she worked as a Corps of Engineers hydrologist and an environmental impact report researcher and a community college professor. But she would say that her proudest, most gratifying occupation was as a mother. Thatâ€™s how I knew her, and I testify, as a daughter, that she was both a natural at it and an enigma. And I wish I could ask her about it all now.

I wonder what she would think about my own forays into a novel kind of parenthood. I would hope that she would understand my babahood as the logical extension of a childhood as a tomboy. She always wished I was more girly than I was, and yet at the same time, paradoxically, she was unmitigatedly proud of me for who I was (she was an especially rowdy supporter throughout my years in girlsâ€™ softball leagues).

Were she here now, regardless of how she would see my parenthood, I know she would look at her granddaughter and recognize a fellow bibliophile, a one-day Berkeley High student, and a lover of me, from the other generational direction.