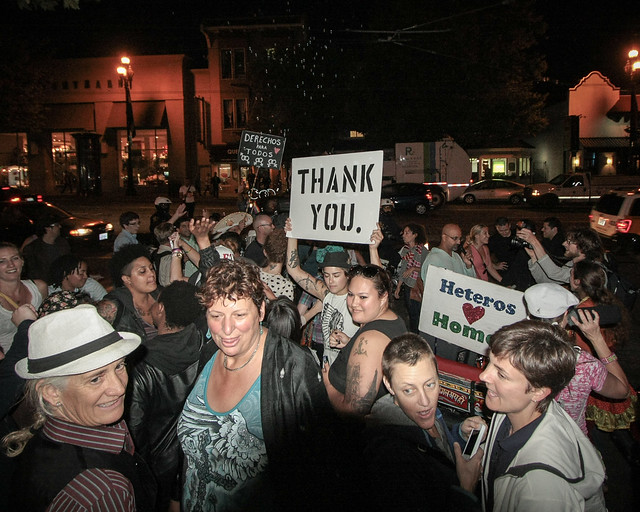 Consider this image a placeholder. Soon I hope to file a longer, more image-strewn and word-bedecked accounting of Mrs Dad’s and my foray into the City last night, in which we joined thousands of our kind in rejoicing the death of  Proposition 8 and the Defense of Marriage Act.

Above: just a block down from the epicenter intersection of Castro and Market Streets, someone had pulled up a bike that was tricked out with a ginormous, self-contained sound system on a trailer.  Castro Street between Market and 19th Street or so had been closed to auto traffic since late afternoon, to accommodate the throngs of celebrants, who numbered well into the thousands. But after 10pm, per custom (and city ordinance), the stage had been dismantled and the party had wound down, Castro Street reopened to traffic. Thus the pressing need for this pop-up party.

Dance music blared. People of all sorts danced. A bubble machine spewed bubbles.  And at the center of the swirl danced a woman with a sign conveying the sentiment that united us all.  Simply, Thank you.