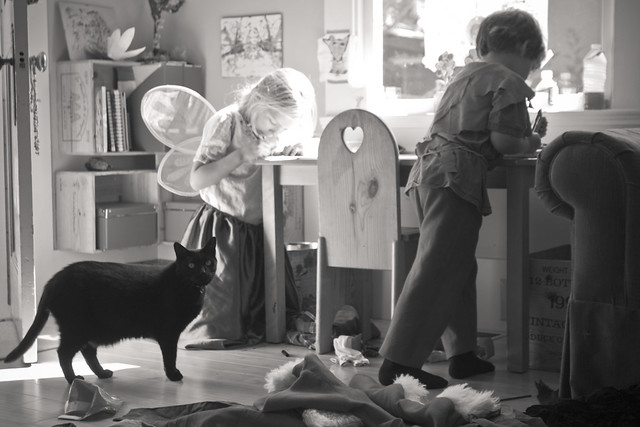 Ever since I began to read about digital sabbaths (and later, thanks to Gwen Bell, sabbaticals), I was convinced that observing one regularly would be critical to my mental health. Both the beloved and I work at home a great deal, using the internet and communicating via email incessantly.  Our big win, up until recently, had been to not answer the phone (or the smartphone-delivered email, or text message) during dinner. A lilliputian accomplishment.

After years of stealing time to write or work while acting as caregiver to the kids, I had become uncomfortably familiar with the feeling of their being a pestering distraction from what I wanted or felt I needed to do on the computer.  Since I began my job six months ago, they’re now cared for by others during all my work-from-home hours.  Still, during this first half-year on the job, I’ve often continued to work up to, through, and after dinner.  I never really left it on the weekends.  Even when I wasn’t at my desk, my mind was.

I recently took a week’s vacation from work in early August–my first, since starting.  I’d cleared the third and largest of a series of work hurdles, and could finally take a rest. Freshly reflecting on Gwen Bell’s teachings around mindful internet use, I persuaded the beloved to observe a weekly, day-long break from all glowing screens and the ingress they provide to our busy-busy-busyness. Our kids complained only once, when they wanted to play a game on the computer.  But then they saw that both of us were completely, unequivocally available to them from sunup to sundown (we chose Sunday). We all had one another’s company and attention, to bathe in and draw sustenance from. The kids quietly, obviously, began to thrive.  And so have we.

We just observed our third digital sabbath, and I am a rabid convert.