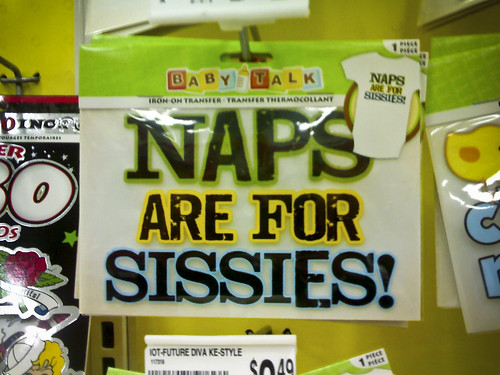 Convenient iron-on transfer for babies and toddlers whose parents can’t be bothered to sew homphobic slurs on their kids’ clothing. Â As seen at Michael’s arts and crafts in Emeryville, CA, a store chock-a-block with fun stuff that my dress-wearing boy was grooving on big time (yarn, ribbons, sewing kits), and a store we’re pretty much not going to patronize any more. Pity.

The iron-on transfer below this one, as you can just make out at the bottom of the cameraphone pic, Â is “Future Diva.” A cute juxtaposition, don’t you think? Sissy? Followed by Diva? Ironic.

Getting one’s knickers in a wad over this use of this term could be seen as oversensitive by some. Fine. Whatever. It’s a free country. Won’t be the first time I’ll have been accused of being oversensitive. Â But just as an illuminating excersize, I invite you to substitute any number of low-grade, utterly tolerated in their heyday pejorative remarks about, oh, say, this or that ethnic or racial group, or maybe people with diabilities. I don’t need to run it out for you here. It’s easy enough: pick your stereotyped characteristic, pick your slur-lite. Casually naturalized derision. Show of hands: who among you thinks “sissy” isn’t a gateway term for “faggot”? Â And for bonus points: which term do you think is most frequently Â yelled at men who are in the midst of being gay-bashed? Â Right. I’m going to go with: “Faggot!”

This innocent joke of a t-shirt slogan popped out at me as I was strolling through the store with my 3 year-old son who, five days out of seven, takes off his pants or shorts and puts on a skirt or dress. Â Matter of fact, he had a nice flower print number on as he held my other hand, the one not taking a quick cameraphone picture of this funny transfer. Who the heck knows what kind of man he’s going to be. Â I sure don’t; not yet. Â But I do know there’s no effin’ way I’m supporting a store selling gateway hate speech.