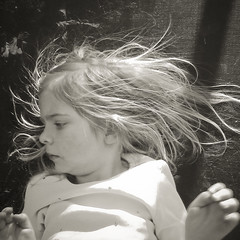 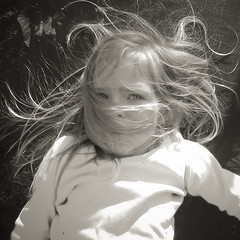 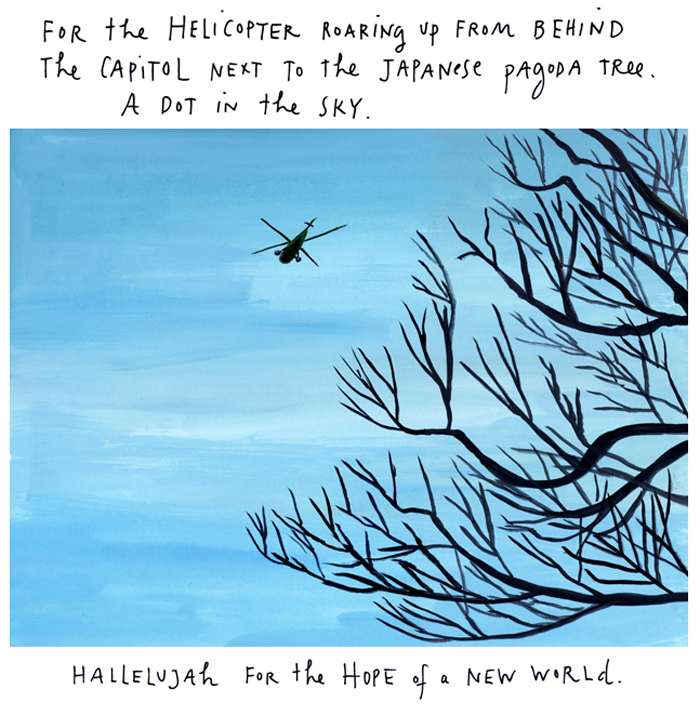 Couldn’t have said it better myself: a series by Maira Kalman, “The Inauguration. At Last.”

She’s been given a berth the last Friday of the month at The New York Times, “And the Pursuit of Happines,” in which she’ll explore American democracy.  I might find myself tempted every now and then to send you over there.  If her eye for detail and the moment continue to do such a fine job of conveying what I might have liked to have conveyed, had I been there.  Wherever there is.  Was.

[By the way: Kalman refers, in the series, to having listened to Lorraine Hunt Lieberson’s singing Bach cantatas en route down to Washington.  Which makes me want to say: listen to this.  Nine minutes six seconds.  And also say: here, here’s the second part.  And the third.  But just a minute sixteen seconds into the first part, that will do.  Her voice singing: Ich habe genug, I have enough.  (Also: I have had enough? Depends I suppose on what you’re listening for.)  Some might have seen her sing this, directed (I think) by Peter Sellars, decked out in hospital garb, indicating terminal illness.  When you know that she died quite young — quite, quite in her prime — of cancer.  Well.]

Okay, I could have foisted this trio of cameraphone videos on a pianist friend and asked her to try to identify the piece (hi, Skye!), but then I thought: wouldn’t it be more fun to ask the world wide internets?

Our girlchild burst in the door last week in as close to a dither as I think I’ve seen her. She’d been at the neighborhood toddler playground. “Baba, Baba! I made a new friend at the playground today!”

Which of course put me in a dither, because our daughter is — how can I put this diplomatically? — she’s a touch eccentric. Not so much anti-social as, well, a-social. Like, if she needs other kids her age, it’s a little hard to tell sometimes. Let’s put it this way: at preschool, for the first half year, we would find ways to casually ask her which kids at school she was making friends with, and she’d usually say something along the lines of, “I don’t so much play with the other kids. But I do talk with the teachers.” Eventually she seemed to actually develop friendships with other kids at preschool. I was nearly as grateful as I was when she started peeing into the toilet.

Still, even recently, when I nudged the old “any people you especially enjoy spending time with at school?” topic, she mentioned a gal who’d left the school last fall for Kindergarten. Sigh. I followed up with another question, and she said, “I usually play with myself. It’s less rowdy and more mellow that way.” She accompanied this with a little nod, and a sort of a studied, thoughtfully-knit brow. 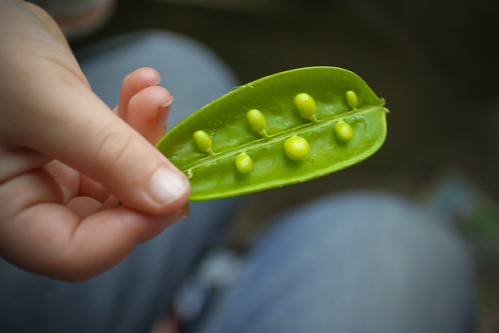 “It looks like an opened leaf, with tiny green raindrops on it,” said the lil’ monkey, as she held the opened snap pea.

When I am running through the short list of why it is that living around growing young people is a really, really wonderful experience — meaning, literally, wonder-full; mostly theirs, and hopefully as much as possible, mine — this kind of stuff ranks very high.

Basically, they see the world differently than we do.  Thank heavens. Lucky world.