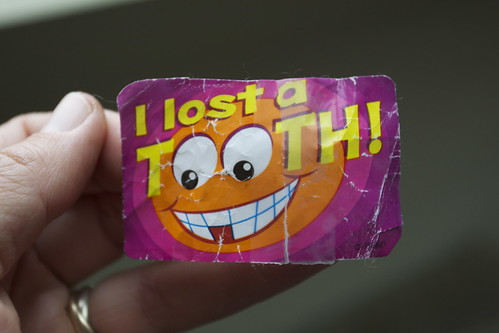 No one has lost a tooth in the household as of yet, a matter which brings the girl child no end of grief.

When kid after kid in her Kindergarten began to swagger into class of a mornin’, Â gap-toothed and worldly-wise, she started to fret. She asked us why it was that everyone under the sun was loosing a tooth and not her. We told her it was because she was among the youngest in the class if not the youngest, and most kids were losing them at the point one ordinarily does (when one is not a member of a pint-sized after-school fight club, say). Â Upon which news she burst into tears. Â She’s proud of many of her uniquenesses, but clearly, we discovered on the spot, not this one. Â From our standpoint, it’s something to be proud of, her holding her own among her kinda-elders. Clearly we’re looking at the situation from, well, our point of view.

Anyhow, for whatever reason — not tooth loosery on the part of our kid’s, but maybe generosity on the part of another tooth-loosin’ comrade — this sticker found its way into our place and nestled itself alongside a heap of flotsam and jetsam underneath the small work table in our multipurpose room.*

“Baba, there’s an evil train underneath the table!” says the boy child the other day. Â He grabs me by a clump of fingers and leads me into the room.

“That evil train!” sez he, pointing to the orange bug-eyed face thingy grinning maniacally from the shadows.

I kneel down, fish it out, and hold it up for his closer inspection.

Brief pause, during which Baba’s mind contorts, and… of course. Thomas the Tank engine books â€“> Diesel Â (a frequently evil train featured in one of them) â€“> same graphic design style as this braggy tooth sticker, give or take a few engineering details â€“> sticker = evil train. Â A hop, skip, and a jump, and presto! I see what he sees, and he makes perfect sense. It keeps you nimble.

1 thought on “In the eye of the beholder”