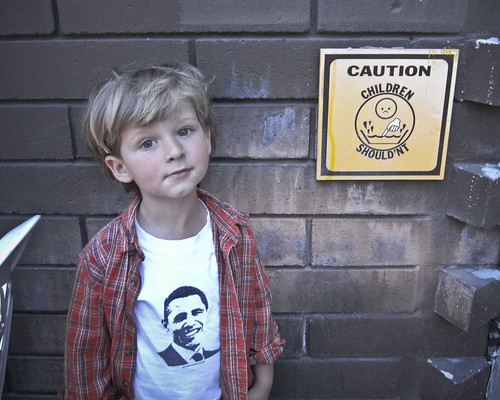 The boychild and Pops and I went to a cafe long a favorite in my home town — so long a favorite that it’s entirely likely that the inimitable Dr. Maddow supped there. Â Okay no one sups there. Â But maybe had a stack of pancakes there, or an omelette. Â Over which she’s sure to have debated Middle East politics, unlike some of us, who were more likely to have been debating which band was greater, The Who or Led Zeppelin. Let me hastily head off at the pass any of you rapscallions about to note that she could probably debate that point with equal alacrity. I don’t need to dwell on these things.

(For those of you just tuning in, Dr. M hails from the same home town as me, thereby both putting it on the map and casting me more squarely in her long, tall shadow.)

The point here, is: CAUTION CHILDREN SHOULDN’T what?! This was the question Pops and I asked each other, between bites of our own omelettes. Pops thought maybe children shouldn’t stick their finger in soup? I thought maybe they shouldn’t stick their white gloved finger in soup? Â There was nothing resembling a small, menacing body of water anywhere in view of the sign, though one might suppose such a menace may once have existed. Whatever it is that the disembodied white gloved hand is sticking its finger into, it is making the hovering happy face above it sad.

We didn’t ask the lil’ peanut, since he would be hard pressed to identify anything — animal, vegetable, mineral, or perhaps most especially his big sister’s back, just when she’s on the verge of becoming really irritated Â — that a child should not put a finger into.

No, we didn’t ask the waitron. Â That would have spoiled all the fun.

10 thoughts on “Food for thought”