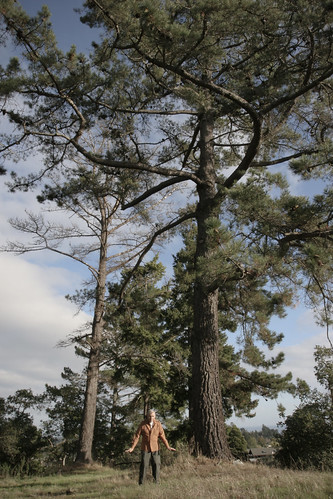 Pops, indicating the height of the trees when his dad planted them 70 years ago.

In my recent, breezy, Twitter-length series of As to some Qs about lesbian fatherhood, I wrote: “My dad is one of the beacons of love in my life.” Â True story. Â One of his most oft-repeated definitions of family is this line from the sympathetic speaker Mary in Robert Frost’s poem, “The Death of the Hired Man”:

Home is the place where, when you have to go there, Â They have to take you in.

One of the clearest and warmest youthful memories I have of my dad, besides standing next to him singing as he played Broadway show tunes on the piano, or playing frisbee with him in the back yard, or walking the streets of San Francisco en route to an “old timey movie,” Â is how he tucked my sister and me in at night. Â I can’t vouch for what he might have said with my sister in her room, but I suspect it was fairly similar to what he said to me. Â We would wax philosophic — mostly at first, he would, and I gradually joined in as the years wore on — pondering life’s big imponderables. Â Then as he’d turn out the light and linger in the doorway, he’d say, “It’s a good world.”

He said it enough times that I pretty much came to believe him.

He’s not always kept a firm grip on this belief. Â In the first years following his first grandson’s cancer death — five years ago, now, later this month — he framed it as a question rather than a statement. Â At times he simply admitted that he felt it couldn’t be true. I’d try and reflect as much truth back that I could. Â “It’s a heck of a world, Pops. It’s a big one, a stupefying one, with capriciousness side by side next to grace. Â No more good than bad, maybe even. Â Surely beyond my ken.”

Still, we agreed that capricious or no, we ought to love as many as possible, as well as possible, as frequently as possible. Â I like the “possible” part there, since it cuts a hard working person a little break. Â We may not always be successful, but the point is to try.

In the photograph above, taken last fall, my dad is posing in front of some conifers his father planted in the early 1940s. It was on a patch of land overlooking the Monterey Bay, a place to build a home, the first and last my grandparents had owned. Â There were few trees on that meadow at the time, and my grandfather thought that, on general principle, there ought to be some. Since these trees were saplings, our family has seen marriages, divorces, births, and deaths. Â Triumph and tragedy and every mundane thing in between. Â The stuff of life. Â Meanwhile the trees kept growing, paying our comings and goings and squabbles no mind. Â One eventually caught a disease that denuded it. Â Still, it stands tall, awaiting storm winds strong enough to topple it.

The land and what’s on it are now another family’s. Â They, like our family has three times now, are fighting cancer. Â We all hope they have better luck than we’ve had. Â Whether or no, it gave us a good deal of comfort that this place — its home, its trees — would now shelter a family Â drawn there by, among other things, a sense that it might make a good place to heal.

Lost in a book