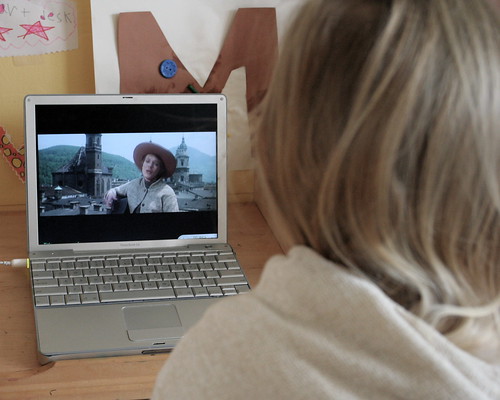 [Warning: jumbo post alert. But this is about Julie Andrews, among other things, so I must be forgiven.]

We are all of us preparing around the house for a very important family event later in the week. Thanksgiving? Naaaaaw. I mean, that’ll be wonderful, sitting around a long table with our extended family, feeling warmed in the bosom of our mutual love and understanding, reflecting on the many blessings for which we each feel grateful. Don’t get me wrong; it’s one of my most favorite holidays. Even after becoming a vegetarian, which puts a decided kink in it.

But no. I’m not talking about Thanksgiving. I’m talking about the one, the only, the SING-ALONG SOUND OF MUSIC, people. And it’s coming to the Castro Theater. It bears noting, for those not familiar with San Francisco, that the Castro Theater is a grand dame 1920s movie palace, among a handful in the country built back then and still screening pictures. It’s home to one of the Bay Area’s few remaining Mighty Wurlitzer organs, which is in constant use (they play a rousing version of “San Francisco” before weekend shows, if memory serves, and definitely use it to accompany silent films, etc.).

And it’s smack-dab in the gay people part of town.

This aspect of its locale was lost on me when, as a kid, I used to go with my pops and my sister to catch various “old timey” movies playing there in repertory. We three would go to The City (always capitalized, according to local custom) to the Gateway Cinema, or the Richlieu, or the Castro, to watch the films my dad thrilled to as a youth. Usually they were musicals, and we saw them all: Astaire and Rogers, Kelly and Charisse. I would traipse or swashbuckle my way back to the car, usually imagining myself to be the male lead. (What? Doesn’t everyone?)

When we were kids, I never really noticed much about who else was in the neighborhood of the Castro Theater. The only thing I remember was that Dad would insist we all dress up nicely, and I was irritated by the bother. He maintained that one always dressed up to go to The City. Now that I know a bit more about my dad’s circuitous path to my mom, I rather wonder whether it was more like one always dressed up to go to The Castro. Ah, but that’s another story for another day.

This weekend, Sing-along Sound of Music-goers will be dressed up, alright — as Mother Superior; as Kurt, Brigita, Liesel, and whomever; as “Tea with Jam and Bread” or even “Schnitzel with Noodles.” It’s part of the tradition, dating back to the origin of this particular Sing-Along at London’s Gay and Lesbian Film Festival in 1999. I fully expect the whole retinue of the Sisters of Perpetual Indulgence at the San Francisco shows this weekend, but they may not make the Friday matinee showing that we’ll be attending (along with queer families by the dozen — we can thank local groups the Mamas and Papas and Our Family Coalition for organizing that).

Our own family may not have our shizzy together enough to get dressed up (I know; I know: “girls in white dresses with blue satin sashes.” But imagine my horror during the subway ride there and back. Plus blue is not my color.). I do know, however, that the lil’ monkey will be ready for the singing parts. I know this because it had to be six months or a year ago that I heard her quietly, even distractedly singing, from the back seat of the car, “And underneath her wimple she has curlers in her hair.” See, she doesn’t watch TV per se, but we do let her watch a select batch of film classics featuring Julie Andrews. What else do you expect of the child of lesbians? Also, she needed to be prepared for our annual family tradition, the Vernal Equinox High-Speed, Three-Act, Sing-Along Sound of Music Puppet Show.

We launched this as an annual tradition while the monkey was in utero, back when we lived solo (i.e. not quasi-communally w/ the bro-in-law’s family). At the time, I thought: we need to get us some family traditions going on, and what better than organizing them around a major Pagan holiday! And what better event than a puppet show! That’s the ticket! And why not start doing it early, before the first kid is even born, so we can work out the kinks by the time s/he actually gets old enough to notice the production values? I didn’t even know that there was an actual, in-the-movie-houses Sound of Music sing along; I just worked through a logical process: what musical has a kid-friendly plot line that I can get behind, and a bunch of songs that even grown-ups would remember and be able to sing to?

Oh, and one other detail: the musical had to have Julie Andrews in it.

All you lesbians reading this will understand how crucial it is, the Julie Andrews factor. It’s all so self-evident: Luminous beauty and sumptuous voice; moxie for days and gumption to spare, etc. (Hey, I just realized: this must be why I love my beloved so! Substitute a Minnesota accent for the British one, and a dark, Mediterranean-ish look for the peaches and cream Brit one, and — poof! there she is! Underneath her wimple she’s got Baba in her hair!) But back to Dame Julie. I welcome further musings about why it is that so many of us love her, but we do. I know it in my heart, plus Wikipedia says so. Heck, Julie even knows it. If she didn’t before, she did after she watched Maile Flanagan’s One Woman Sound of Music in Minneapolis in the 1990s. In her show, Flannagan cruises through all the characters and the entire plot in 50 minutes. Needless to say, the nuns are lesbians and Liesel is a bisexual gal. Rumor had it that Andrews, in town for Victor/Victoria, snuck in and watched the show and loved it.

Our Vernal Equinox High-Speed, Three-Act, Sing-Along Sound of Music Puppet Show doesn’t feature lesbian nuns, which is a surprise, since the Mother OutLaw, quite the lesbian and quite the playwright, did the adaptation (familial nickname key here). A very liberal adaptation, I should note. All the irreverent anti-authoritarianism remains from the original film, and the anti-fascism. But the edges of characters and plot details are rammed together for maximum madcap effect. It had to be rammed, if it was to fit into a 20-30 minute show. Remember, she was writing to accomodate the average adult attention span, which we all know is 20 minutes, max. (Which reminds me: Hey you! In the back there! Wake up and get back to the blog!)

Here’s a snippit of script from our unauthorized Puppet Show version:

Oh dear, Maria is missing from the Abbey again!

“How do you solve a problem like Maria….etc. ” (THE AUDIENCE SINGS ALONG)

(RUNNING IN AS THE SELECTION ENDS) I’m so sorry, Mother Superior. The hills were beckoning, the sky was so blue, the hills were so green and I can’t seem to stop singing wherever I am. It’s terrible!

Maria, it seems to be the will of God that you leave us…

Please don’t send me away!

There’s a man — Captain Von Trapp, he’s a fine, brave man. He needs a governess to take care of his seven children….

The Lord will show you in his own good time. (SHE LEAVES. THE SIGN AND CROSS ARE REMOVED FROM THE SET.)

What’s the matter with me? Why am I so scared?

(THE INTERIOR OF THE VON TRAPP HOUSE SET DROPS SUDDENLY.)

And so it goes. The Know-It-All-Brother-In-Law and I do the puppets, and whatever kids who wish to help out with the set design and prop wrangling. Of course there’s an accordion (played by the inimitable Gramma Skye). The Mother OutLaw, her esteemed partner, and sundry other conscrips read the dialog. The beloved, of course, sings the part of Maria. We invite the block, and everyone we know who has kids or is a kid at heart or even kids or jokes once in a while. The credo of the event: To make family out of community, and community out of family.

Which is what the Sing-Along movie is probably going to do, at least for ninety minutes. Heck, it’s what Thanksgiving is about, at least for one night. At its best, it’s what I try to do with this blog, for however long it takes you to read it, and the babbling brook of comments that sustains it and keeps it from being a solipsistic monolog. Now, I bid you so long, farewell, auf wiedersehen, good bye! I have to go find me some brown paper packaging tied up with string.

[Bonus fun: The IMDB Sound of Music trivia page, where you’ll learn stuff like, Christopher Plumber “likened working with Julie Andrews to ‘being hit over the head with a big Valentine’s Day card, every day.'”]