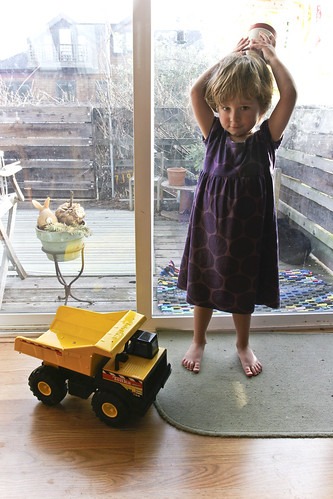 The Tonka truck: a holiday gift from his special cousins. (Who?) In it were a clutch of dollies, which, so far, he has given a bit more attention to. Though he loves the truck.

The dress: mooched from his sister for the day. He said it made him look like “Nina,” whoever that is. Off and on he claimed “Nina” was one of the fairies who accompany Tinker Bell on her Pixie Hollow peregrinations. I’m not so sure, but he stuck to that story all day.

Over the course of a busy day, he also found time to (a) listen over and over again to the sweet, tinny sound of the hits from The Wizard of Oz as they emanated from a spiffy kid’s book, also from his special cousins (his fey Grampy sang harmony, and we can only imagine what it might have meant to this man, whose coming out was so hard-won, to sing “Over the Rainbow” to his abundantly loved, dress-wearing grandson), and (b) punch his sister in the gut in the midst of some random, insignificant dispute. Â Okay, not so she’d double over, but still. I wouldn’t cross him on the playground. Definitely wouldn’t tell him the empire cut isn’t as good a look for him as a nice little T-length number.