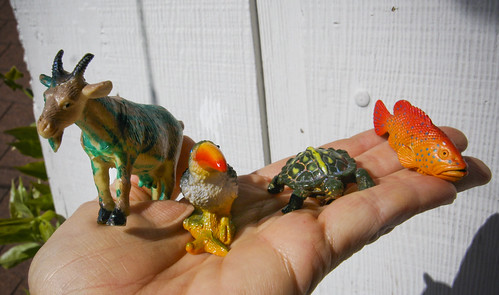 Four critters I am highly unlikely to want to divorce my spouse and up and marry, if indeed my marriage to my spouse is recognized as legal.

What do a goat, a tucan, a turtle, and a fish have in common? Â They’re things Bill O’Reilly thinks folks will rush out and want to marry, if same-sex marriage is widely recognized as legal. Â No, really, I’m so not kidding. Â

I know, he actually has suggested a goat, a duck, a turtle, and a dolphin, but I haven’t gotten my kids a duck or a dolphin figurine yet. Though of course now they’re lookin’ kinda good to me.

Have the stomach/sense of humor for more? Also up today is Pam Spaulding’s “The ‘best of’ batsh*t anti-marriage talking heads.” Not for the faint of heart, or those with an aversion to the phrase “Mark my words…” followed by hellfire and brimstone proclamations that make my kids’ odd flights of fancy sound perfectly reasonable.

Do I think derision is going to be the finest way for this whole conversation to move to the most humane point? No, not at all. Â But in the cliff-hangery final week(s) before the California Supreme Court decision on Prop 8, some occasional levity is in order. Â Plus, I want to pass this stuff on, because (a) it helps to know the extremes to which the conversations gets, on national media networks and from the mouths of very well-publicized folks, and (b) if marriage equality goes coast-to-coast in a generation, all the good goats will be spoken for!Â Â Now go out and make some memories, people!

[It’sÂ A month o’ photosÂ at LD. Here for words only? Please check back in June 1.]