[Ed note: These are in color, since LGBT Pride is inherently colorful. Also: more is likely to come later, along with a few notes on the day. But one had to at least share a few gay families at the Pride Parade images ASAP. Especially given what’s “P,” or possible, these days. Â Which is not as much as one would like. Last week’s deathly quiet here attested to this eloquently. Worry not (I say to myself as much as anyone else listening)! That which is keeping me entangled and away from ye olde blog now is actually the pavement for its more turbo-powered, unfettered movement in the future. As Steve Jobs said to disgruntled iPhone 4 users: “Stay tuned.”] 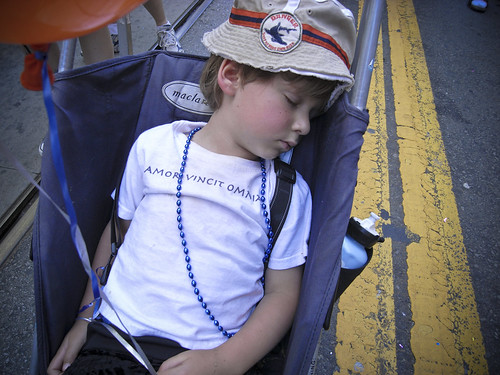 The young kid at Pride image. I.e., asleep in the stroller. A far more photogenic version of this image was being pulled nearby us much of the way: kid in red wagon, shaded by a green froggie umbrella, and accessorized with a dozen or so stuffed animals. Big hit. Â Also, kid asleep the whole time. 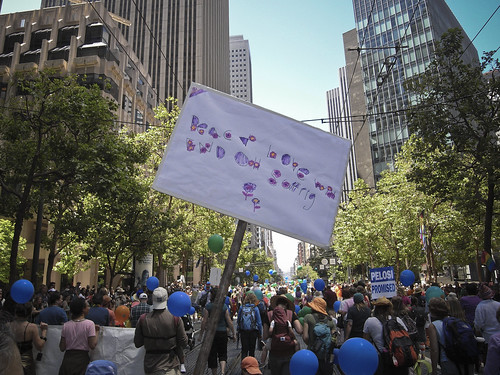 Our lil’ monkey’s sign: her first. Thought it up and created it utterly independently. Then, after showing it to me, said: “I have to take this to Pride.” Times they are a growin’ up. Â The sign reads: “Peac + love will end oll suffrig.” Or, for the rest of us, “Peace + love will end all suffering.”

Now who’s gonna say these kids don’t have a helluva lot of good stuff they’re fixin’ on giving the world as they grow up? I direct all skeptics to Dr. Gartrell’s recently released and much-attended to longitudinal study of our kids, whose many results included the perhaps not-so-surprising conclusion that our kids wind up being more well-adjusted than average. Â I’d say keeping your eye on justice and your mind on love does good things for your overall adjustment factor. At least anecdotally speaking. 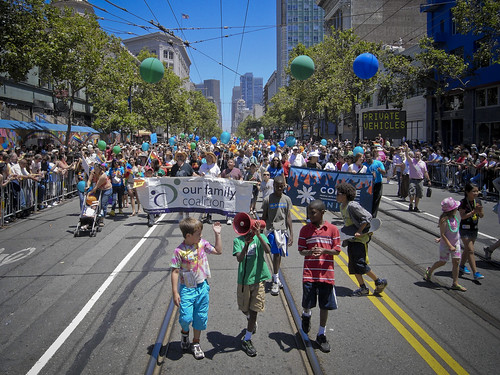 And here we go. Kids leading the family contingent in the parade. Behind them,Â Our Family Coalition, COLAGE, and our blocks-long, balloon-bedecked brigade, enjoying the toe-tapping sound of the Australian Youth Band in front of us. Pride wouldn’t be Pride without marching band versions of Gloria Gaynor’s “I Will Survive.” Â (Here’s a list of the other 177 some-odd contingents who were marching.)

Wherever yours was, I hope it was the best Pride ever!