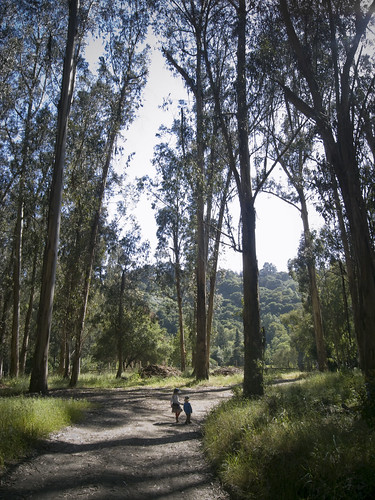 A modicum of perspective: among the eucalyptus, Tilden Park, Berkeley, CA. [All thanks to my chum AnnZ who has lent her Ricoh ’til my camera comes back from the shop!]

Rumors are a-flyin‘ that we’ll learn at 10 today that the CA Supreme Court will tell us their Prop 8 decision tomorrow. I tend to believe ’em, since they’re based on friendly tipsters in SF and LAPDs. Crowd control barriers have begun to appear in the Castro & elsewhere. Â I’ll up date this w/ more when I can get back to this computer (off to preschool dropoff now). But I think the watchwords will be Margo Channing’s, from All About Eve: “Fasten your seatbelts, it’s going to be a bumpy night.”

(Meanwhile here are some inspirational words from our friend Kate last week on the In re: Marriages decision anniversary.)

*UPDATE: No ruling scheduled to be filed tomorrow, Thursday, May 21. Which is probably a darn good idea, since tomorrow is the 30th anniversary of the White Night Riots, which followed the virtual aquital of Dan White. The response to the whisper-light sentence should have come as no surprise, given he shocked the city by assassinating Supervisor Harvey Milk and Mayor George Moscone in cold blood. Â (The film Milk stopped there, but late journalist Randy Shilts’ classic studyÂ The Mayor of Castro Street tells the whole story.)

As one of the 18,000 “married” couples awaiting news of the validity of our 9-month-old marriage (hot on the heels of our 11-year-old commitment ceremony), I just want to register my irritation at their taking nearly the full 90 days to announce. Â Unless, of course, it’s what it took to get the mystery fence-sitter judge to slip down onto the justice for minority rights and protection of the constitution from mob rule side of the fence. Â In which case, pass the Rolaids; I’ll wait.

For those planning ahead: check your area’s day of response here at Day of Decision, and Californians (heck, anyone west of the Rockies), remember we’re going to meet in Fresno the Saturday following, come heck or high water.

[It’sÂ A month o’ photosÂ at LD. Except every so often I actually write mini-posts. Like this one.]