[Ed. note, re: post title. I’m supposedly doing a month of photo-only posts, of which this would be the 12th. I slipped. Â Again. Â And the danged Supreme Court hasn’t even tipped its hand yet.] 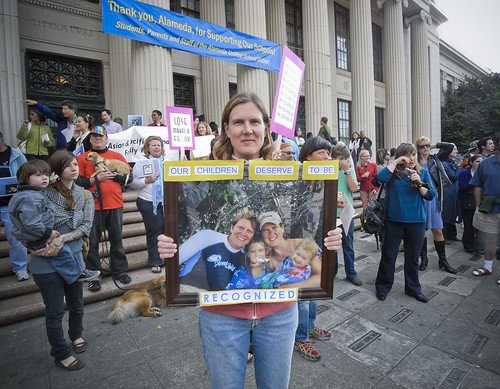 IÂ came home from the Alameda School Board meeting close to midnight (I write this in the wee hours), and found my daughter already crawled into our bed, her arm entwined with my beloved’s arm, both their heads inclined in the same direction. In his crib my son looked, as he always does when he sleeps, like he was plucked directly from a 16th century painting of cherubim and seraphim, Â hastily clad in 21st century jammies.

As I looked at these people I am giving my life to, and would do so over and over again if given the opportunity, I found it utterly impossible to reconcile the words I heard from opponent after opponent of the Caring Schools Curriculum. Â

The “carryover” meeting was scheduled to enable the 100+ people to speak who wanted to but couldn’t at the meeting to consider the curriculum last week. Â It began at 6:30pm and ended somewhere deep into the next month, it seemed, and was a microcosm of how this whole LGBT/ family diversity curriculum battle is shaping up around here right now. Â Only a more or less civil version of it. Â

Sadly, some of the less civil part of the evening came from the curriculum’s supporters, in the way of occasional “boos” and hissing at some of the opposition speakers; Â one rather lathered up man popped a spring, and essentially begged to be ejected when he felt the procedures for speakers had been circumvented. Â I didn’t hear the man in the devil costume the first week, but this week he was in civilian clothing, and the lathered up chap from the curriculum supporter’s side made a cameo in his role.Â

Still, the civility on the the opposition’s part was civil only in the “f#ck you very much” sense. Â It’s the Miss CA school of charm: “No offense! Â But you’re offensive!” Its version last night: “I think you’re morally objectionable and I wish you’d just disappear, and I’m not really thinking about your kids at all; not in the least! But I’m all for tolerance!” Â It’s an incivility that is appalling in its utter simplicity, in its naked unselfconsciousness.Â

There’s so much to this, and I want to try to render it in more subtle detail. I hope to soon, but this wee hour is not the one in which to do more than paint a few broad strokes.Â

Broadly: at the core seems to me to be an utter, absolute, intractable, final conviction that a people (my people) are simply wrong. Because I can’t figure what else to call it, when it’s something others say they are opposed to, something they just “don’t agree with.” Â As if one might somehow disagree with the weather, or or disagree with left-handedness.

Where does this leave our children? You tell me.

At the core — deeper by far than the myriad misunderstandings and misinformation regarding the anti-bias, anti-bullying curriculum already in place, to which this would be aÂ supplement, by request of teachers who wanted some tools to use in their classes where they saw harassment and ignorance taking root — at the core seems to be a conviction that it’s a moral issue. Â And I agree that reflecting the family structures and truths of all the kids in a classroom is absolutely an ethical, perhaps even a moral issue. Â

But that’s not what opponents seeing as “moral” — what’s moral is sexuality, and heterosexuality is moral, and homosexuality is immoral. Â The logical extension is that, therefore, our children, as the children of immoral people, should never see their families referred to in class, and even more, should reference ever be made to their families, other kids’ parents need notice so that they can remove their children from class before such mention is made.Â Â

The spectacular irony of the night was that the more the opposition argued that the subject should be removed from schools — that is, the more they insisted, in so many words, on our public invisibility during our kids’ formative years — the more urgently obvious was the need for that very visibility. Â One extremely moving gay dad implored the board, “We are not looking for special treatment. We are trying to exist. I’ve got a thick skin, but my child does not, and I need your help on this.”

I took page upon page of notes, and as of page 24 (it was a small pocket notebook), I just wrote at the bottom: “No. Hope.”

Not “no hope” that we’ll ever move on this; I think we will, somehow, battling every inch of the way. Â But at that point — as of page 24, must have been well past 10:00pm — I had no hope that any of the opponents of that curriculum in that room would ever really see us. Â I mean really. Â See. Â Us.

Though Pacific Justice Institute founder and president Brad Dacus did not speak tonight — for better or worse, most of the opposition was from one Alameda demographic — he is far from silent on the issue of what’s under consideration in the Alameda schools. Â

THIS MORNING he will be debating Groundspark’s Debra Chasnoff (filmmaker of “That’s a Family,” a key part of the curriculum) on conservative talk show The Laura Ingram Show. Â THIS MORNING — at 11:15 am Eastern, 9:15 am Central, 8:15 am Â Pacific Standard Time. Â

Please call in and voice your support of LGBT-inclusive curriculum; though the conflict in Alameda is the jumping-off point, the larger topic is the relevance of this curricula everywhere: if the battle royale hasn’t come to your town yet, it will, and we all need to be all over this. Â

The Laura Ingram Show will open up comment to callers from around the country, and (particularly because of its conservative audience) it’s important to have some supportive voices call in. Â You can listen live atÂ http://1260.am/programming/listen/ ; the number to call isÂ 800-876-4123.