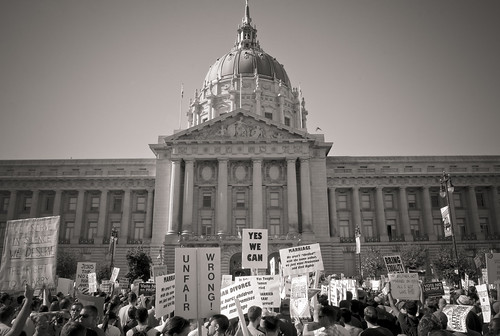 Here’s a good image in the opposite direction, found at the Towleroad photo gallery of Nov 15 protest actions coast-to-coast.  It’s taken from close to the steps of City Hall.  If you squint, you can see me.  Riiiight there.

I may be tempted to add more later, after I’ve got the kids in bed.  Had to at least put up something.  A mere smattering of the upwards of 10,000 (?) folks peaceably, good naturedly, high spiritedly standing up for full equality for gay people in SF today.  More across the Bay Area, California, and nation-wide.

Meanwhile: what next?  How ’bout A DAY WITHOUT A GAY, Wednesday, December 10!  Call in gay!  And donate your free time to service.

*[Added later, in breathless fragments since that’s the only way it’ll get up here before 3am]

More coverage of the whole shebang (coast-to-to-coast and beyond).

•  I could just go on but heck.  You can see (if you didn’t in person & up close in your own home town) that oodles of people came out and stood up and really, really gave each other hope.

Now some quickie notes of my own, from the SF rally.

•  Big cheer for Migden when she said something or another about splitting the state in half.  Sorry to my bretheren & sistren in SoCal, but.  Robbie, the nice chap who shared a precarious perch next to me, mused about which way was she talking? North-south, cleaving the more progressive coastal areas from the inland?  Or East-west, keeping the majority of the no on 8 counties all clumped up north above Monterey, or whatever.  Hmm. 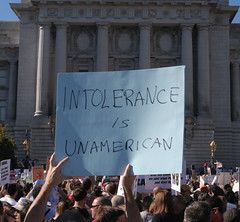 •  Things picked up when people walked up who knew what to do with a microphone and teeming masses in front of them.  Ammiano said something or another about (that phrase will crop up here, sue me; I didn’t bring a tape recorder) about the religious right’s insistence that sex is a miracle, or something (and therefore should be shrouded in heterosexuality, as are all miracles? I missed the nuance).  Tom says, re: the miraculous, “So is popcorn, until you explain it.”  Then goes on to say, to great cheers: “Boys and girls, this is not about sex, this is about LOVE.”

•  Another big cheer erupted after Ammiano said something or another about homophobia, and followed it with “Racism and sexism serve the same bastard.  And it’s time we bitch-slapped that bastard.”

•  And Reverend Amos Brown.  Well.  Let’s just say, the man knows what he’s doing with a crowd and a microphone, and a righteous cause.  Big huge cheers following “Though I’m a Bapist, I refuse to be a bigot.”  And on and on.  Talked of Emmet Till.  Rallied black and brown and red and yellow and straight and gay and — yes! — even white!  I mean really.  Talk about generous.

•  At one point, he said something or another about something inspirational, and the crowd erupted in a huge cheer, and my precarious perch-mate Robbie whistled loudly with his fingers in his mouth.

“What was that last thing he said?” I asked Robbie.

• A woman was hopping down from a nearby precarious perch, and said to her partner, “Will you catch me, if I fall?”

“That’s what marriage is about, honey,” quoth her beloved.

• Members of The San Francisco Lesbian/Gay Freedom Band provided inspirational music from the sidewalk as a breakaway clump of 7,500 (so said a press estimate) left the rally around noon, and headed for Market Street.  For the second time in less than two weeks, witnessing a political event moved me to tears.  The sound of the band, with the marchers streaming by behind them.  Possibility.  Self-empowerment.  Mad as hell and we’re not going to take it anymore.  Last straw.  Love, totally standing up and saying to hate: ¡BASTA!  Now let me show you how it’s done.

Having a wonderful time…