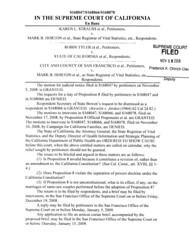 One hears from Kate Kendall, et al. (soon the rest of the news media) that the California Supreme Court will hear challenges to Proposition 8, and has set an expedited briefing schedule.

I know close to diddly squat about things legal, but the dates at the bottom of the court order (available here) note that a “brief” may be filed by intervenors no later than December 19, and a “reply” by petitioners (presumably to that brief) no later than January 5 of next year.  Amicus curiae briefs may be filed on or before January 15.

* [Maura Dolan’s LA Times piece on this notes the hearing will be scheduled for March 2009. All of which serves to confirm the diddly squat remark above.]

If the court acts as swiftly as I want it to act (you know, as opposed to however damn fast or slow it needs to to think this through thoroughly), we might have a decision by our new president’s inauguration.  Lord love me if it’s good news than I guarantee I will be wearing Depends undergarments on his inaugural, since I will for sure be so elated I will pee.  Yes, I said it here.

Now if it’s not good news, whatever. I may still need the undergarments.  I’m just not guaranteeing it.

Today the California Supreme Court granted review in the legal challenges to Proposition 8, which passed by a narrow margin of 52 percent on November 4. In an order issued today, the Court agreed to hear the case and set an expedited briefing schedule. The Court also denied an immediate stay.

On November 5, 2008, the National Center for Lesbian Rights, the American Civil Liberties Union, and Lambda Legal filed a lawsuit challenging the validity of Proposition 8 in the California Supreme Court on behalf of six couples and Equality California. The City of San Francisco, joined by the City of Los Angeles, the County ofLos Angeles, and Santa Clara County, filed a similar challenge, as did a private attorney in Los Angeles.

The lawsuits allege that, on its face, Proposition 8 is an improper revision rather than an amendment of the California Constitution because, in its very title, which was “Eliminates the right to marry for same-sex couples,” the initiative eliminated an existing right only for a targeted minority. If permitted to stand, Proposition 8 would be the first time an initiative has successfully been used to change the California Constitution to take way an existing right only for a particular group. Such a change would defeat the very purpose of a constitution and fundamentally alter the role of the courts in protecting minority rights.   According to the California Constitution, such a serious revision of our state Constitution cannot be enacted through a simple majority vote, but must first be approved by two-thirds of the Legislature.

On November 17, 2008, the California Council of Churches and other religious leaders and faith organizations representing millions of members statewide, also filed a petition asserting that Proposition 8 poses a severe threat to the guarantee of equal protection for all, and was not enacted through the constitutionally required process for such a dramatic change to the California Constitution. On the same day,prominent California women’s rights organizations filed a petition asking the Court to invalidate Proposition 8 because of its potentially disastrous implications for women and other groups that face discrimination.

Over the past 100 years, the California Supreme Court has heard nine cases challenging either legislative enactments or initiatives as invalid revisions of the California Constitution. In three of those cases, the Court invalidated those measures.

16 thoughts on “Breaking: Court will hear challenges to Prop 8*”