Two years ago my sister called me from Copenhagen, where she was then living with her family, to tell me that her son wanted to do a presentation to his first grade class about Gay Pride. Each kid in the class was presenting on a holiday from their home culture — it was an international school — and my nephew, bless his soul, wanted to share about Pride. 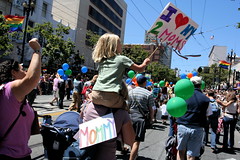 He’d been to it earlier that year with his tiny cousinette, and they’d romped and frolicked in the “Family Garden” that our local LGBT family group, the San Francisco LGBT Center’s KidSpace, and COLAGE cosponsors at the end of the march. You know, the usual Pride hi-jinx: face painting, clowns, T-shirt tye-dying, wall-to-wall kidsville. All to the thumping disco beat of the music on the main stage off in the distance, over the fence. In Copenhagen, my sister was working with the moms of a friend of his — Lesbian Americans, fellow ex-pats — and wanted to know if I had any ideas about how to approach the topic. I dug and dug, and found material to fill an email to the brim, but oh, if I knew then what I knew now. Heck, if everyone knew what some people know now, thanks to documentary film alone.

Last week at Teacher’s College at Columbia University in New York, GroundSpark Media premiered the documentary film It’s STILL Elementary; its San Francisco premiere is this Thursday, October 25th, 6:15pm at the JCC on California Street. The film looks at the impact of the historic documentary It’s Elementary — Talking About Gay Issues In School. The documentary cogniscenti among you will know that GroundSpark (formerly Women’s Educational Media, and still the brainchild of Acadamy Award-winning director Debra Chasnoff) also is behind That’s A Family, the documentary about family diversity that was recently given the heave-ho in New Jersey (not that the story has ended there, to be sure).

The new retrospective documentary It’s STILL Elementary follows up with some of the students and teachers from the groundbreaking film It’s Elementary — Talking About Gay Issues In School. It looks at what happened when the film was screened across the country, the response it provoked from the conservative right, and is a call to action for parents and educators to continue working for safe, inclusive schools

The web pages for each of GroundSpark’s films are comprehensive, and include rich subsidiary materials such as notes on who should see the film, curriculum guides, statistics about the topics (e.g. for Let’s Get Real, a documentary on bullying and name-calling, the Statistics on Bullying page includes a synopsis of the issue and abundant reference to source material).

For LGBT parents, their allies, teachers, and school administrators wanting to address school safety for kids of LGBT families and LGBT kids themselves, these films are invaluable. Staff development including screening of It’s Elementary could help prepare members of a school community for classoom screenings of That’s A Family. A curriculum guide — free with purchase of the film — supports teachers’ development of a rich family diversity curriculum that includes activities, other books, even alignment with various state standards.

“But hey!” I hear some of you say. “I want more than just a packet of info with my documentaries! I want me a workshop, people! Train me, already!”

To which the folks at GroundSpark have said: “Here! Have a workshop!” Feast your eyes on this PDF, which provides an overview of the trainings done by GroundSpark’s Respect For All Project, which they’ve done for over 6,000 professionals since 2003 in cities across the country.

No question, one of the very biggest, most important jobs in front of LGBT parents today — you know, aside from the daily hoo-ha of parenting — is the work of making our kids’ schools safe places for them to learn. A great many people are doing amazing things in this arena, and I look forward to sharing a lot more here than I was able to share with my sister, a few years back. Even though they did manage, over initial objections from administration, to help my nephew present something on the Pride holiday and the people who celebrate it. Like his friend and her two moms. Like his auntie. Who is prouder than proud of him.

[Later note: Ooo! In case you missed it, like I initially did, here’s a great post on the films by Mombian’s Dana Rudolph, including extensive insights from Dana’s interview with filmmaker Debra Chasnoff, regarding how to bring these films into your schools with the best chances of success.]