Alrighty, so this is quite the non-photo post in the midst of my photo-only post month. Â Again, forgive me. Â If I could have, I would have included shots of the person wearing the devil costume speaking to the Wednesday Alameda Unified School District school board, testifying as to how all will go to perdition if tolerance for family and gender diversity is included in the school district’s curriculum. Â But I’m kind of glad that image is not burned into my brain. 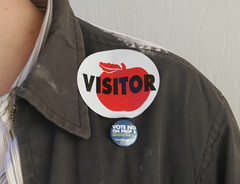 Before I go on, I’ll also note my stakes in the matter: I’m not a resident of Alameda, and my kids will be going to school in neighboring Berkeley Unified. Â However, I grew up a stone’s throw from Alameda, over the decades have spent many a “tourist” dollar there, worked a long time for outreach programs looking to improve the college educational prospects of K-12 kids in underserved schools throughout the Bay Area, and am a proud product of the public school system of the East Bay, K-16. Â When my high school basketball team got lucky and extended our reach beyond our immediate local competitors, we sometimes played Alameda HS. Â Usually lost. Â Probably because Rachel Maddow wouldn’t be on our team for another ten years. Â Another story.

But: my interest in what’s happening in AUSD — and yours, too — is this: history has shown that right wing anti-gay organizations fight these curricula tooth and nail, and are emboldened by one win to go on to attack them in neighboring school districts. Â This AUSD curriculum development process has been a slow, careful one, and it’s wronger than wrong for a busload of zealots from way outside the Bay Area to come and overwhelm a local process. Which is just what happened on Wednesday night.

Read the Groundspark blog piece on it here — “Time to Take Action” — if you haven’t yet. Â Coverage of the meeting is also at the online version of local TV stations KTVU Â and NBC.

Parents, educators, and community members in Alameda have been working on a family and gender diversity curriculum for two years now. Alameda C.A.R.E. (Community Alliance Resource for Education) is “a grassroots organization of community members advocating for inclusive safe school environments,” and their website provides information about the curriculum, its supporters, and even its local, community-based detractors (their website is atÂ http://pwp.att.net/p/s/community.dll?ep=16&groupid=406357&ck=). Â

Another comprehensive resource on the issue is AUSD President Mike McMahon’s page on the matter: Lesbian, Gay, Bisexual and Transgender Curriculum in AUSD.

There’s a lot to read, but the overview is that the process has been painstaking, the buy-in and contributions have been broad. Â There has been spirited debate in Alameda over this, to be sure. Â But at the same time, the curriculum has been endorsed by:

As one who’s not been on the inside of the process all along, I don’t want to do much more than report here, and send you where you can read up more on your own. Â ASUD School Board President McMahon’s site is a wealth of information. Â I’ll just excerpt this testimony from the May 13 meeting from a parent of two children at an ASUD school:

I am adding my support for the new safe schools curriculum.

Hopefully you have seen that the voices in opposition to the new curriculum are mostly from one church, one demographic, and many if not most, did not have kids yet in our school district. Some were very careful to say “I have children in Alameda schools” which does not necessarily mean AUSD schools. They were all reading off the same script have the same concern.

Those in favor of the new curriculum were from a wider cross section of Alameda, both the LGBT community and not, current school parents and some not, from various different churches and not. There were different voices and reasons to support the curriculum.

The only concession to the opposition that I could think of would be for teachers to add while teaching the safe schools curriculum, that some families for religious or cultural beliefs are taught at home to believe differently -fine- but when on AUSD school property- the children must be tolerant and not use derogatory language or bullying.

I am a new mother, living in Alameda and a friend with a children attending Edison School informed me of your mission to make our public schools safe and appropriate for ALL families including our LGBTQ families, their children, and LGBTQ by adding the new curriculum,”Addressing Issues of Sexual Orientation and Gender Identity”.

I want you to know that I support this curriculum 100%. That AUSD would take measures to secure this kind of cultural education for my daughter and her peers, gives me great hope for the future of education on a national level, but also, I feel increasingly more confident that my husband and I were correct to chose Alameda as an excellent, progressive place to raise our daughter.

I would also like to share my concern that providing notification to families and/or giving them the opportunity to “opt-out” supports bias. I cannot imagine how offended the community at large would be if given notification on a unit about racism or the lessons of Martin Luther King. Teaching children about tolerance and how to respect diversity is not something that should be confused with a “moral issue” or “sex education”. To allow these issues to become entangled muddies your mission.

You can go to President McMahon’s page to read more, or better yet, come to the meeting on Monday. Â Lisa OrduÃ±o-Arcia, an Our Family CoalitionÂ staffer who’s been working on this issue, is both a parent and an Alameda resident. Â She sent a note to OFC members this afternoon, and I’m including her closing info here for those who are interested in coming to show their support on Monday:

4. Â  AttendÂ Â Monday May 18th 6:30 pm the Board of Education public hearing held in Kofman Auditorium.Â  The PRESENCE of supporters in large numbers is critical.Â Â Â

Okay Bay Area sisters and brothers. Clear your Monday evening calendars and get your butts over there. Free “amor vincit omnia” buttons to the first ten people that see me thereÂ (look for the dapper, greying, mannish white lesbian with the camera, trying hard to keep her menopausal irritability in check). Â And if you don’t go for the buttons, or your own personal stakes, go for Jaheem Herrera, orÂ Carl Joseph Walker-Hoover. It is not at all a stretch to say that curriculum like this may well have saved their lives.