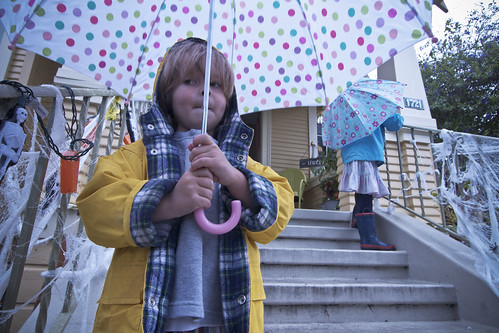 I’d say it goes without saying, but alas, it doesn’t. Mebbe not to y’all, whom I know to be a well-informed and engaged bunch, but one still has to honk the horn.

Here’s the League of Women Voters’ polling place locator, if for some reason you or a chum over your shoulder doesn’t know where to vote locally:

For locals to me, meaning Californians, here’s the Courage Campaign’s Progressive Voter Guide, in a handy-dandy printable PDF format:

Do note, fellow Californians, that the sane vote on Prop 23 is not merely NO, but “HELL, NO!” I take this verbatim from the page from which the guide itself comes, and I couldn’t agree more.

I close with some words from my doppleganger Dr. Rachel Maddow, who said the other night on her show, “What the election comes down to is getting your tuchus off the couch.”

Visit msnbc.com for breaking news, world news, and news about the economy

So arise ye cynics! Arise ye malcontents! You have nothing to lose but your rationale for complaining about the wisdom and loyalty of your public servants!

And if you’ve already voted and are interested in various ongoing updates, here’s Greg Mitchell’s live blog over at The Nation. 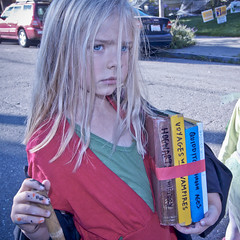 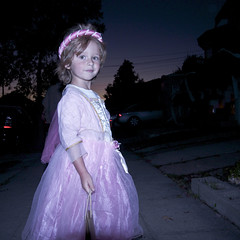 And so it went, Halloween ’10: Hermoine (the bookish Harry Potter sidekick) at left, and the Fairy Godmother at right. Hermoine shown pre-tie, which went on moments later. And shown with books, which were jettisoned some moments after that. Â They were great as a prop for the costume contest held at our neighborhood’s annual Halloween Block Party, but too damn heavy to lug around when a person has to focus her energies on dragging a huge bag o’ candy behind her for a coupla blocks.

Cloak remained about as off-shoulder/dilapidated the whole time. She’s not one for haberdashery details.

The Fairy Godmother, on the other hand, is, and had a wonderful time, not least because he wore sensible shoes for walking, not the sparkly dress-up things he picked out at the store. Which were not made for walking.

In other news, yet again, the Halloween Candy Fairy has paid a visit to the household. What is the Halloween Candy Fairy, many of you might ask? I’m glad you asked. She/he visits the households of kids fortunate enough to have hauled in more candy than they can reasonably consume, even if meted out in small doses over a month. Â You pick out the candy you want (exact # of pieces can be negotiated; amounts vary across households), and leave the rest in your bag. In our household we leave the bags near the front door. In the morning the eager moppets hustle out of bed, dental health intact and incipient diabetes at bay, and rush to see what nifty giftie the Halloween Candy Fairy left them in their bags. The lore is that the Halloween Fairy takes your extra candy and gives it to other kids less fortunate.

Laugh all you like, but it’s a great way to eat most of your kid’s Halloween candy, guilt free.