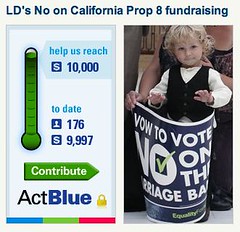 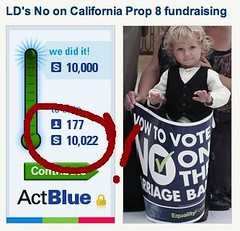 Yay people!  We cracked 10 G’s!  For morale-boosting purposes, I think we should leave that nice brilliant “we did it!” thing up there for the weekend.  But I just might be tempted to “mush” us on further next week.  Just saying.

[By the way: another long list of (first) names, hometowns, and gigs will be forthcoming next week, including those who got us to our first goal of $5,000, and those who brought us to our second of $10,000.  But I have a sweetie’s 40th birthday to celebrate this weekend, so it’ll take a few days.]

A few additional notes (okay, more than a few): First off, my sister, who, in cahoots with her Norski spouse and my Pops, essentially contributed 10% of this goal this time around (yep: they went back and donated again, this time shelling out a cool thousand dollars), came up with a great idea for those of us digging extra, extra deep:  Holiday cards printed with either “WE WON!” or “WE TRIED!” on them!  Since that’s pretty much all she’s going to be able to afford to send around this year.

I think it’s a smashing idea.  As soon as I’ve dusted myself off after this much-unwanted roller coaster ride, I just might try to bust out a line in time for holiday gift card giving.

I’m also glad it was her that broke the quadruple-digit donation barrier. Because on my No on 8 catch-all page,  while admiring the inventiveness of the lesbian cabal in the very effective 8against8 campaign, I quipped that for “Quadruple digit donors, I’ll legally change my kids’ names to whatever you want.”  Fortunately for me, I can suggest to my sister that she already shares the same last name as my kids.  She might be okay with that.

Another note is: we absolutely mustn’t let up.  A recently released poll by the Public Policy Institute of California found slightly more in opposition to the proposition (52%) than in favor of it (44%).

But the landscape looks different through other lenses.  Two other polls put the “Yes” vote on Proposition 8 in the lead:

A poll by Marist College in Poughkeepsie, N.Y., conducted this month for the Knights of Columbus, a Catholic group that has put more than $1.2 million into the effort to pass the measure, showed Prop. 8 ahead 52 to 43 percent. A SurveyUSA poll done last week for a group of California TV stations had Prop. 8 with a narrow lead of 48 to 45 percent.

Regardless of the difference in method or reputation between the various polls, the upshot is that the electorate is enormously conflicted over this, and remains still fairly evenly divided, especially when you consider the “gay Bradley” effect, or whatever you want to call it.  No, I’m not saying former L.A. mayor Tom Bradley was gay.  No.  Just, you know, the social stigma of admitting to your bigotry over the phone keeps our polling numbers as unpredictable as those for candidates of color, to the tune of 7-10%, as we have found in all the past anti-gay marriage ballot measures over recent years.

The PPIC poll does seem to suggest, however, that the No on 8 message is getting out there, and YOU, generous donors and hardworking phone bankers, have yourselves to thank.

It also helps that California State Superintendent of Public Instruction Jack O’Connell stepped forward and cleared up the lies about the impact of Prop 8 on curriculum in the state.  Your donations are helping this ad, and others like it, get seen:

Final note, again along the lines of we cannot let up.  In the “it’s going to get messier and messier ’til the whole shebang is over” file, we have this “Calif. gay marraige ban backers target businesses”:

Leaders of the campaign to outlaw same-sex marriage in California are warning businesses that have given money to the state’s largest gay rights group they will be publicly identified as opponents of traditional unions unless they contribute to the gay marriage ban, too.

All the more reason to continue to keep the heat on.  And if you should find that keeping the heat on entails doing a web search on a computer, try to use Google as your search engine, on an Apple computer.  Apple announced today it’s ponying up $100,000 to help defeat the measure (Google co-founder Sergey Brin came out against the measure last month, and has, along with his co-founder, contributed collectively some $140,000 to the No on 8 campaign).

But it’s not just generous-heartedness that gets these companies, headquartered in this state, to come out against the measure.  They’d stand to lose big if there were a gay brain drain.  University of California, Berkeley Chancellor Birgeneau said as much, in a press release of a few days ago:

In denying a fundamental civil right, passage of Proposition 8 would undermine these principles, not just for our LGBTQ community, but for all racial, religious and cultural minorities and would harm the university as a whole…

For example, in Massachusetts, home to Harvard and MIT, who are among our greatest competitors for faculty, same-sex marriage has been legal for some years. It is recognized in states such as New York, home to Columbia and Cornell, who are also major rivals for top faculty. The constitutional right to marry in the State of California enhances UC Berkeley’s ability to attract and retain the very best students, staff and faculty, with the promise of equal treatment under the laws of our state.

He closes with a reference to the work of social theorist Richard Florida, not at all a surprise for those familiar with his work about  the so-called “creative class” of creative professionals and knowledge workers, and the co-incidence of gay-friendliness and gay communties in an areas that are thriving (“The gay/hipster index” is a catchier way to frame it.)  At any rate, Google, Apple, and UC Berkeley, each of which relies on drawing the best minds from far and wide, aren’t going to stand idly by on this issue.  And as a product of one of these institutions, and a user of the other institutions’ products, I’m pretty proud.