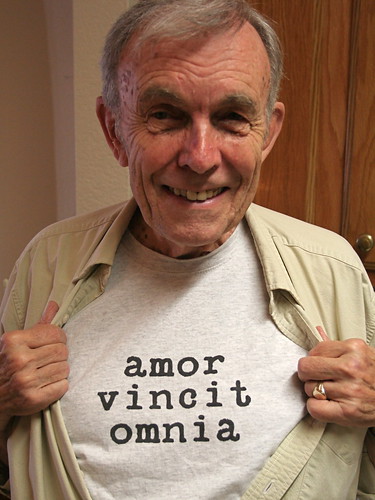 This is my dad. Â

He is a life-long optimist. Â The older he gets, the more simply and purely he values love over all else. Â

He was legally married to my mom for upwards of thirty-three years. They’d still be married now, if she were alive. Hell, they still are.

He dearly wants California voters to defeat Proposition 8, which would remove the right lesbians and gay men have to marry in this state, and set back the gay civil rights movement nationally. Â He wanted me to use his picture here on this blog to underscore that point.

Why does he care?

Because, like parents of LGBT people everywhere, Â I’m his child. Â He worked for the state of California for nearly forty years, paid taxes to it for over seventy. Â It is a point of honor to him that I’m treated fairly by it.

Because my kids are his grandkids, and like grandparents of LGBT parents everywhere, his grandkids’ legal protection and financial stability are of enormous importance to him.

Because he, along with my mother, raised me to respect others’ dignity and their equal share of the state’s legal recognition and protection, regardless of how similar to me they are, or how different. It cuts him deeply to think others don’t share that view, a view he traces back to the most elemental lessons of right and wrong he learned as a child at his parents’ knees. Â It cuts him so much so that he tries not to think about it. Â And yet he can’t not.

Because in four score and seven years of living — at least twenty-five of them knowing I was a lesbian — he never thought he’d see the day that someone like me could be legally married in city hall. It was one of the most wonderful, hope-affirming things he’d ever witnessed, and we both felt it.

Please give what you can to support the fight to retain marriage equality.Â

The Yes on 8 campaign is out-fundraising our side at a pace of 3 to 2. We must match what is raised dollar for dollar with the right wing; if we do not, we are at serious risk of losing this November.*

Now please pass this on to all the loving grandparents you know. Â

You’ve probably heard that the polls show our side ahead. Some are saying that victory for our side is a sure thing. Don’t be fooled!Â This race is too close to call.Â The ugly truth we have learned from defeat after defeat in states across the country is that people lie on polls, especially about how they feel about LGBT people. In contest after contest, from Wisconsin to Colorado, we have gone into election day with polls showing our side with 7 to 10 points more support than we actually received at the ballot box.

And, these polls do not factor in the media battle that is about to unfold here in California. We know that between 15% – 20% of California voters remain undecided on Prop 8.Â We can persuade them to vote no, but only if we reach them first and often with our message.Â Reaching them via TV will be vital to winning.Â

[next in this marraige equality series: Marriage equality and our former babysitter]

Check off one more event in the adoption decathlon

A place at the table

6 thoughts on “Marriage equality & my dad”