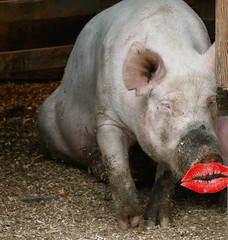 I know, I know. The economy is heading straight into the crapper faster than a college freshman’s umpteenth drink too many.  We’re all comrades now (who knew!  the Republican party and the titans of capitalism deliver us an estrogen-packin’ VP candidate and a socialist state, all in the same jam-packed one month period!  I so wasn’t expecting it!). And we got way bigger fish to fry than lipstick-wearing pigs.

More important, that tempest-in-a-teapot is soooooo a week-and-a-half ago.  Soooooo pre-Wall Street implosion.

Plus, the only lipstick I care about is what rubs off on me from my sweetie’s smooches.  Not that anyone asked.

But!  It’s been such a nonstop No on 8 campaign over here at LD* that I thought I’d pass along a little levity to counterweight the gravity.  And who can resist George Saunders? From “My Gal,” in this week’s New Yorker:

…So, when Barack Obama says he will put some lipstick on my pig, I am, like, Are you calling me a pig? If so, thanks! Pigs are the most non-Élite of all barnyard animals. And also, if you put lipstick on my pig, do you know what the difference will be between that pig and a pit bull? I’ll tell you: a pit bull can easily kill a pig. And, as the pig dies, guess what the Hockey Mom is doing? Going to her car, putting on more lipstick, so that, upon returning, finding that pig dead, she once again looks identical to that pit bull, which, staying on mission, the two of them step over the dead pig, looking exactly like twins, except the pit bull is scratching his lower ass with one frantic leg, whereas the Hockey Mom is carrying an extra hockey stick in case Todd breaks his again. But both are going, like, Ha ha, where’s that dumb pig now? Dead, that’s who, and also: not a smidge of lipstick.
A lose-lose for the pig.
There’s a lesson in that, I think.

Now g’wan and read the whole thing. (And hasty readers alert: it goes to a second page!  So don’t go complaining that he just left the whole thing dangling, click the dang link to page 2!)

* …about which No on 8 fundraising, yow!  We just might make the goal, people! At $5 — a latte & a muffin, fer crikey’s sake! — we only need 239 more folks to chip in!  Okay, or how ’bout 30 to 50 high rollers? Are you sure you’ve talked this up to everyone you know?  And have they?  Do you feel like you can afford to wake up to a victorious Proposition 8 on November 5th, knowing you didn’t bust your ass on this?  Didn’t think so!

2 thoughts on “A little lite diversion”