I don’t even watch television, but a friend has been saying for months, “Don’t you know about Rachel Maddow?! You have to! Brilliant! Â Progressive! Â Out dyke! Â From your home town fer Chrissakes! Â On television! Go watch her right this very instant and then report back.” 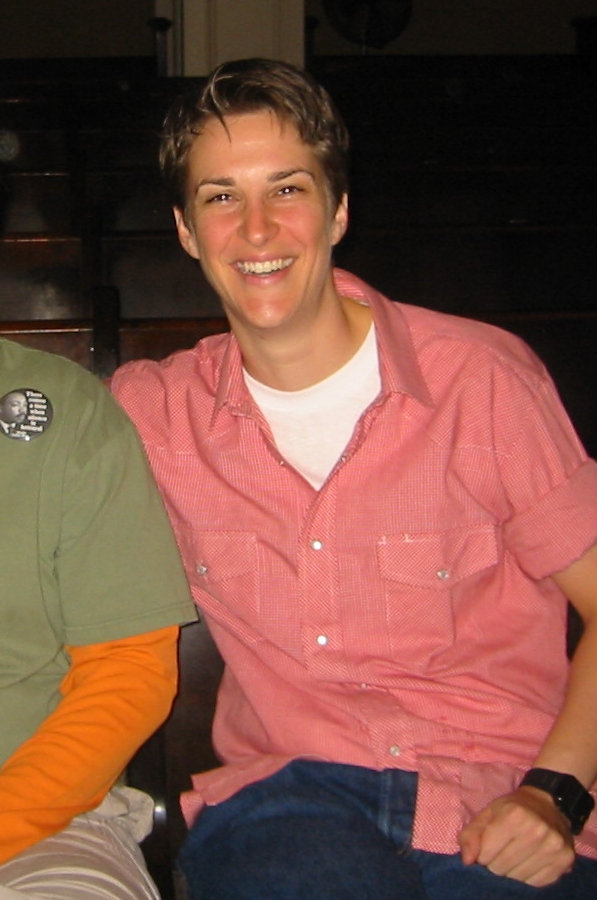 Sadly, the years of Rachel Maddow’s ascension in broadcasting have more or less paralleled my years either in family crisis or early parenthood or both. So I’d been a bit tuned out. Also, we moved the TV from one room to another about a year or two ago, and managed never to really plug it back in again, beyond hooking up the DVD player. We can’t have the child watching Dottie’s Magic Pockets on my computer here, now can we?

But I succumbed to the peer pressure, checked out Rachel Maddow (pictured at right — see? you think I’m kidding? she’s like, like, like US!), and hot darn was I not disappointed. She reminded me of my smartest chums, laying into [name the topic] with gusto and good humor and insight and research to back it all up. Ah, my peeps.

Now I’m going to guess that nine-tenths of you out there are actually are aware of public events and the people analyzing them, in both alternative and commercial media, and are therefore aware of Ms. Maddow. At least you US residents. For the remaining tenth of you, whether you’re US residents in a partial media blackout, such as I have been, or enlightend folk abroad — and assuming a sharp witted, articulate, progressive, out dyke on the TV set is a thrill — oo! and you wanted more than newlywed Ellen DeGeneres! — I suggest you hie yourself over to any of the links below to acquaint yourself with the new HOST OF HER OWN NIGHTLY COMMENTARY SHOW ON MSNBC. Starting September 8th. At 9pm Eastern, 6pm Pacific. Â I’m guessing it would be somewhere in between for my mates in Central Standard Time.Â

I may have to plug the TV in after all.

Ms. Snarker makes the astute point that while she may be “the last person on earth you thought would break into the upper echelon of the boy’s club of political reporting,” it also could be that “maybe, possibly Rachel’s new gig means that America has warmed up to the idea of a smart, funny lesbian telling them important things.”
Warms this gal’s heart, I’ll tell you what.Â
Ms. Maddow is fielding suggestions about what her show should be called. Â The only thing I can think of is, SHE’S FROM MY FRICKIN’ HOMETOWN! Â And that’s not a suitable title for a national news commentary show. Â Maybe, WITH ANY LUCK ONE DAY SHE’LL BE A LESBIAN DAD, TOO! Â Though again: not really on target.
Also nonsequitorial, but still worth noting, is that her hair is about the length mine gets when I can’t afford a haircut. Â And when she wears eye mascara (was that redundant? maybe so. out of practice.) she blinks about as frequently as you would expect someone to, who up until recently only wore eye mascara (I just have to keep it redundant now) to Halloween drag parties.
I will close this glee-fest (yegods! a mannish lesbian on YOUR TV, spouting polysyllabic left-wing political analysis, NIGHTLY!) by pasting below the third video clip I’ve foisted upon you in one week: the announcement on last night’s Keith Olberman show. Three: that’s two more video clips than I ordinarily post in, like, half a year. Â Maybe a year.
Forgive me. Â Thoughtful prose to return soon.

Love to the land o’ lakes

What the Berkeley Parents are chewing on this week