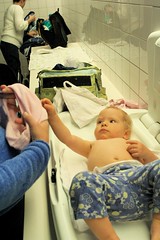 …While simultaneously loathing the placement of 90% of changing tables in women’s rooms only?

When I was a younger pup, I used to think Reason #1 straight gals might envy lesbos was the obviously superior sexual satisfaction level of the woman partner. Meaning, of course, both of us. Now this might have been distorted just a tetch by the somewhat skewed demographic sampling from which I had been gathering anecdotal evidence (um, gals who left guys to be with gals?). But now I’m older, and I have a new vantage point: the changing tables in women’s restrooms! Coupled lesbo advantage: four hands on deck!

Oh, sure, sometimes I have to endure the ignominy of being razzed on the way into the restroom. I often am; happened again this weekend at the Oakland Airport. It’s the plight of the gentlemanly dyke in a world with few public unisex bathrooms. But when the object is a diaper change, the hassle of the razzing, which is usually just a temporary confusion about my actual bodily sex, is quickly eclipsed by the natural, might I say even impressive advantage of four adult hands on the job.

Pictured above, for instance, is a random woman in the Copenhagen Int’l Airport last November, diligently doing the job solo, as my beloved and I took advantage of the opportunity not only to change the Lil Monkey’s diaper with grace, but also indulge in a photo op whose caption might be “Nanner nanner boo boo! Yeah, you might enjoy legal and financial protections for your partnership and your kids, but behold the two of us on the job here! Ya-ha!”

The larger issue, as I note at the outset, is that men’s diaper-changing experiences are hampered, no pun intended, by the paucity of changing tables in men’s rooms. A February New York Times article, “Changin’ in the Boys’ Room,” picked up on the topic after Greg Allen, author of the blog Daddy Types, had been diligently researching and documenting NYC men’s room changing tables for years, and went so far as to produce a groovy Google Maps mash-up of what he found.

The Times article ended with a note about a changing table icon by Chuck Ault, who runs Boot Camp for New Dads. (It looks like a great organization, by the way, if you can overlook the ubiquitous martial and sports references, which seem to run through most hetero daddy lingo and products, in what one can only imagine is an attempt to compensate for the presumptively emasculating effect of nurturing a child. Note to self and reader: Gotta fix the broken notion that masculinity and nurturing are mutually exclusive. Oops! But I digress.)

Several years ago Mr. Ault began noticing something on newer airplanes. The signs on the restrooms’ changing tables, which previously had a triangle-shaped-dress character hovering over the baby, now featured a gender-neutral figure. It made the skies seem a little friendlier.

“I think those airplane signs are really symbolic and interesting,” Mr. Ault said. “I think universal symbols are powerful indicators of what is believed.”

Indeed, Brother Ault! Which leads us, in closing, to D at Mombian, who stirred up an interesting conversation about bathroom signage following her own summer perigrinations. Seems like we still have a ways to go, even after the kids are able to go on their own.

2 thoughts on “Reason #1, perhaps, why straight mums might envy the bejesus out of us?”