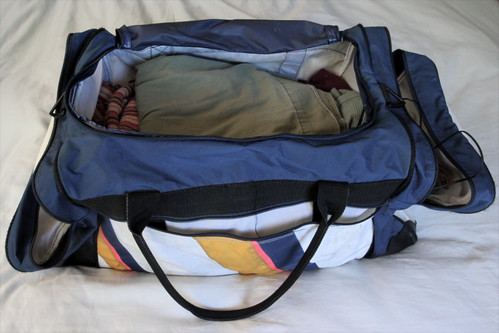 Or so she says. Does that look half full to you?

We’re about to embark on a week’s trip up to the mountains for some hard-earned R&R with the beloved’s dear friend and all four of our kiddles. (I expect to be able to post, but will be doing so with less than Olympic dedication.) Per usual, the beloved has gotten to the packing before yrs truly, and per usual, she has left me her idea of “half” of the bag.

Fortunately, it’s also about as much as I need.  On the upside, she is as chronic an optimist as she is an over-packer.  So it feels like it all evens out in the end.

2 thoughts on “Bag half full”