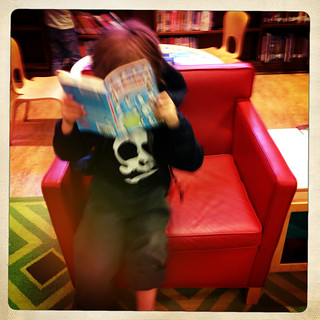 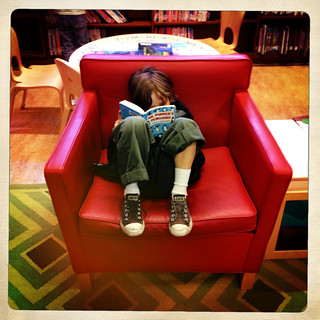 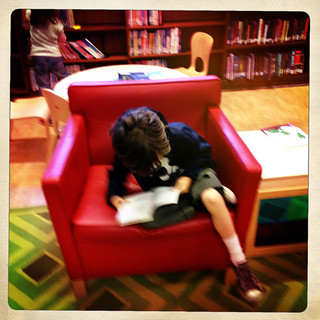 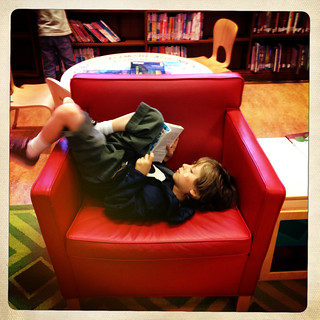 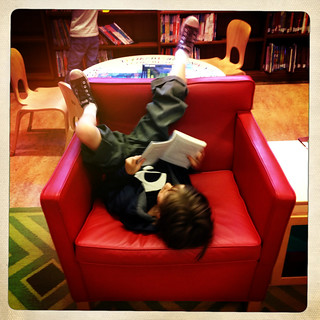 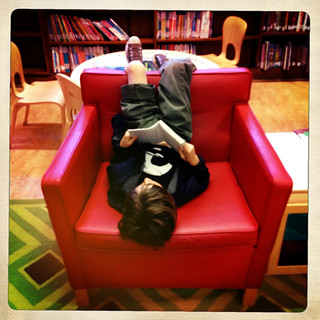 At the library, Berkeley, CA.

My boy is reading now and, true to little sibling form, he is doing everything humanly possible to keep up with his big sister.  Devil–and reason–take the hindmost.

He won’t quite torture himself with the erudite works she plows through, fortunately (Camus, Kafka, Sartre, Dostoyevsky). (OK, I exaggerate, but really, she scares me.)

He does keep picking up and chomping into books which his school would probably call “just wrong” books.  As opposed to the “just right” books they suggest. You know, stuff whose vocabulary you understand at least half of.  But I’m not snatching the “just wrong” books from his hands yet. It’s still such a thrill for him to have joined the party, and I can’t bear to tell him–ever in front of his sister–that he might actually enjoy a little lighter fare.  We’ll get to that soon enough.

Yesterday, at the library, he brought over a Roald Dahl book for my inspection (Charlie and the Great Glass Elevator) and said, “This is funny-looking!” I had to say, “Yes, that would be because it’s in French.”

He looked at me, blinked for a moment, and returned it to the shelf.

Mr. Popper’s Penguins (“just wrong,” but not that far off, and at least in English) is what he chose to keep his imagination spinning.  And spin it did.

I could eat him up with a spoon

7 thoughts on “Lost in a book”