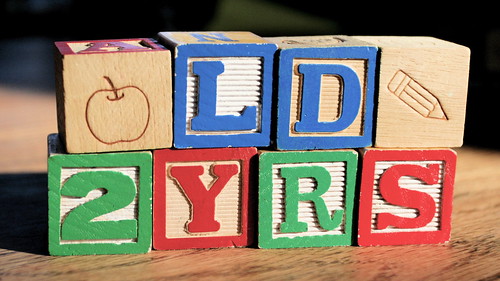 All parents know that “the terrible twos” is a misnomer. The hell really hits after three, but none of us can come up with a word that starts with a “t” that packs the same kind of punch as “terrible.” (Follow the asterisk* for a Roget’s download.) Be that as it may, I sincerely hope that this upcoming year, the third one on my blogular journey, won’t be appalling or revolting or offensive or vile or any other synonym for “terrible.”

The first year was action-packed (about which more here); the second one was, too. Chock full of plenty of fine highlights (a personal thrill: the nod from Kathy Belge at About.com). But most of this past year has been filled with the beloved and me staggering under the weight of our first year with two kids, which, while an enormously fulfilling undertaking, has also been Heck on a Stick. This year’s blogiversary post will reflect that Heck on a Stick-like year, and so will forgo the well-researched annual review in exchange for some quiet reflection.

Whatever the next year has in store, I am committed to continuing to check in here, thinking out loud about the triumphs and tribulations of parenthood generally, of lesbian parenthood in particular, and how (in my experience), being a non-biological and genderqueer parent colors things. I think of these topics as the thematic core of this blog, even though I also do a lot of other cliché parent stuff, like foist pictures of my kids on a hapless and unsuspecting public. And bloviate about issues of broader concern from time to time, as the mood strikes. And meditate, sometimes in an oblique way, sometimes directly, on the deaths that frame my children’s births. Because we don’t talk about death and grief enough in this culture, and because, as I’ve written here before, my parenthood has been as influenced by these things as it has by my being a mannish lesbian.

As I say in the second sentence of my About blurb, I don’t think my own observations about these matters are particularly unique. I’m just willing to make them in public, as something of a public service (at least that’s my intent). Other parents, lesbian and otherwise, do a better job of their work than I do (read more, go to more workshops, contribute more to their community; you name it). Others with older kids certainly have already slogged through what I’m slogging through now, and have already garnered their own insights. Plenty of them have their own blogs, which I hope you read. I suppose, though, that anyone might gather something useful from the account I’m setting down here, insofar as sitting down next to any energetic, chatty person on a bus for a few blocks might yield something. Whether that something’s What to Avoid or What to Emulate or simply What to Chuckle and Shake Your Head About.

I do sincerely hope that gals like me feel less alone. I will never forget a moment I had a number of years back. My beloved was pregnant and I was pondering how few people I knew who were in my parental position. Not a birth parent, not sharing the experience of adoptive parenthood with my partner, not comfortable with being a “mom,” “other” or not, despite being female: it seemed there was no end to the things that isolated me from other people’s parental experiences. I had the distinct feeling of being very alone on a very important journey, and I vowed to myself, in that moment, to fix that, not just for my own benefit, but for others. If I’ve done any of that, simply by being willing to carry on like this in public, then this little project will have been worthwhile.

As a birthday present to this blog, I want to thank all of you who read it regularly. Well over a thousand folks check in daily, from coast-to-coast in North America, and abroad as well. A fraction of that number have registered to comment, and a fraction of that group chat back regularly. In descending order — from those of you who have taken it upon yourself to say a little something back here, to those who think they might one day, to those who know they never will, but read regularly anyway: I want to thank you. There are plenty of ways you could while away the several moments or several minutes it takes you to stop by here for a visit, and I’m the better for your having chosen to while those moments away reading this stuff. If you weren’t reading it, I’m pretty sure I wouldn’t be writing it. Or at least, not like this.

I think about you whenever I write, whoever you are — I wonder whether the content is going to be worth your while this time around, whether I should leaven things a bit, if I’ve been dreary for a number of posts in a row, whether I should try to make time to actually write something, if I’ve been serving up fluff and pictures for days. Needless to say, as a primary caregiver parent and part-time self-employed one, most of the time I have to write is in the wee hours, when my fingers may be capable of moving on a keyboard, but my mind is dangerously untethered. Slash asleep. So I put off actually writing something on a regular basis. And then I hope you are forgiving. Whoever you are.

As another birthday present to this blog, in fact, I’ve launched a little LD Reader Survey. This way I can put an end to the wondering about you and what you think. It’s just a few pages long, and shouldn’t take you any more time than you might take reading an average post. But two years is way longer than I’ve ever gone, doing anything, without any substantive, directed feedback. I’m thinking about working some aesthetic and content changes on this blog, but would only do so with a better idea of what works here or doesn’t. I’ll leave the survey up for a while, and share the results back with you when I get enough in to constitute a statistically significant chunk of responses. 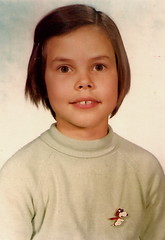 Before I sign off, I feel compelled to note that yesterday was the last day for voting in the Lesbian Blog of the Year thingy. I am quite smug in the knowledge that I will NOT have to be publishing my femmed out senior class photo, as I threatened long ago, should I have shocked myself and all around me by polling in first. So certain am I of my status as non-winner that I will go ahead and post a picture of me taken about a dozen years before my senior class photo, and about a half dozen before orthodonture (note urchin at right). Consider this a little somethin’-somethin’ in gratitude for the votes I did manage to scrounge up.

I showed the picture to the lil’ monkey and asked whether the girl looked familiar to her. She looked at the photo, looked at me, looked at the photo, looked at me. Narrowed her eyes. And then gave up and said, “Who?” The face looked vaguely familiar, but there was no reconciling the two beings, youngster and full-blown grown-up. I can’t blame her. I barely remember that girl myself. I just know that if I saw her today, I’d probably think: “Scrappy little bugger! I wonder if she knows she’s a lesbian?”

* Here’s what Roget has to offer in the synonym department (not a one a â€œthâ€ word): abhorrent, appalling, atrocious, awe-inspiring, awesome, awful, bad, beastly, dangerous, desperate, dire, disastrous, disturbing, dread, dreaded, dreadful, extreme, fearful, frightful, ghastly, gruesome, harrowing, hateful, hideous, horrendous, horrible, horrid, horrifying, inconvenient, loathsome, monstrous, obnoxious, odious, offensive, petrifying, poor, repulsive, revolting, rotten, serious, severe, shocking, unfortunate, unnerving, unpleasant, unwelcome, vile. After carefully reviewing these words, I feel pretty confident that I could say that, in her third year, our daughter has lived up to each one at some time or another. Except for maybe “harrowing,” “repulsive,” and “revolting.” Scratch that. She revolts on a regular basis.

LD is one today