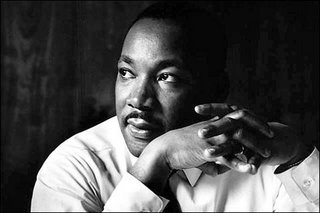 I accept this award today with an abiding faith in America and an audacious faith in the future of mankind. I refuse to accept despair as the final response to the ambiguities of history.

I refuse to accept the idea that the “is-ness” of man’s present nature makes him morally incapable of reaching up for the eternal “ought-ness” that forever confronts him.

I refuse to accept the idea that man is mere flotsam and jetsam in the river of life, unable to influence the unfolding events which surround him.

I refuse to accept the view that mankind is so tragically bound to the starless midnight of racism and war that the bright daybreak of peace and brotherhood can never become a reality.

I refuse to accept the cynical notion that nation after nation must spiral down a militaristic stairway into the hell of nuclear annihilation.

I believe that unarmed truth and unconditional love will have the final word in reality. This is why right, temporarily defeated, is stronger than evil triumphant.

I believe that even amid today’s mortar bursts and whining bullets, there is still hope for a brighter tomorrow.

I believe that wounded justice, lying prostrate on the blood-flowing streets of our nations, can be lifted from this dust of shame to reign supreme among the children of men.

I have the audacity to believe that peoples everywhere can have three meals a day for their bodies, education and culture for their minds, and dignity, equality, and freedom for their spirits.

I believe that what self-centered men have torn down, men other-centered can build up.

I still believe that one day mankind will bow before the altars of God and be crowned triumphant over war and bloodshed and nonviolent redemptive goodwill proclaimed the rule of the land. And the lion and the lamb shall lie down together, and every man shall sit under his own vine and fig tree, and none shall be afraid.

I still believe that we shall overcome.

Coretta Scott King described the holiday in honor of her husband:

Every King holiday has been a national “teach-in” on the values of nonviolence, including unconditional love, tolerance, forgiveness and reconciliation, which are so desperately-needed to unify America. It is a day of intensive education and training in Martinâ€™s philosophy and methods of nonviolent social change and conflict-reconciliation. The Holiday provides a unique opportunity to teach young people to fight evil, not people, to get in the habit of asking themselves, “what is the most loving way I can resolve this conflict?”

On the King holiday, young people learn about the power of unconditional love even for one’s adversaries as a way to fight injustice and defuse violent disputes. It is a time to show them the power of forgiveness in the healing process at the interpersonal as well as international levels.

If you’re looking to help teach your kids more about Dr. King’s life and work, you might consider:

this list of books and websites from the Martin Luther King, Jr. Day of Service website, which includes extensive books for kids, or

Or act in King’s name, helping to build or sustain what he called the “beloved community”:

You can find service projects organized in your community on this day, by searching the Martin Luther King, Jr. Day of Service “Find an opportunity to serve” page.

Finally (and most gloriously): Vanguard Squad has done us all the great favor of putting up the Sweet Honey in the Rock song “Letter to Martin” (adapted from the Sonia Sanchez poem of the same name). Listen and be inspired.

2 thoughts on “A King among men”