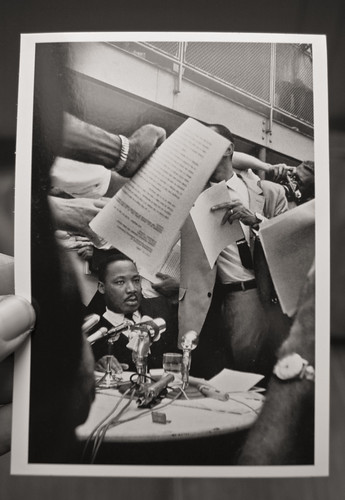 Quiet here of late, getting accustomed to resuming ordinary life, offline and on, in the wake of my dad’s return whence he came 92+ years ago.  The picture above and the links below repeat a post some years back in honor of the Revered Dr. Martin Luther King, Jr., whose life has been such an inspiration to me.

Inspiration how? I came of political age working all my spare collegiate hours in a student group entitled the Martin Luther, King, Jr. Convocation Day Committee (lovingly referred to as the MLKCDC). When I dropped out of school for a nine month period, these spare hours numbered just about every hour beyond those spent at my job or learning how to be a lesbian with my sweetie, who was also a member of the group, conveniently. Every one of us had to read several of his books as a condition of membership, which means now that my bookshelf sports most of his oevre in original hardbacks, thankyouverymuch. It also means I am conditioned not just to parrot the lines of Dr. King’s greatest speeches, but to locate them in context. So: “the moral arc of the universe is long, but it bends toward justice” comes from Dr. King’s “How Long? Not Long” speech (sometimes also referred to as “Our God is Marching On”), delivered on the steps of the Montgomery, AL state capitol at the conclusion of the Selma to Montgomery March on March 25, 1965.

We did a whole lot of good work, the MLKCDC, much of which endures today. The town in which I live sports a long street (notably one of the longest in the region, and one that intersects both Berkeley’s and Oakland’s African American communities), a city park, and a city government building due in part to the organizing work of this group and its charismatic leader, Ronnie Stevenson, Sr. The university at which we were students named the very first building not after a white person after Dr. King, thanks to our work.  These symbolic victories were all the more powerful for their taking place before the federal recognition of his birthday. We brought together lions of the Civil Rights Movement and state and local racial justice activists to an event on campus annually to share strategy and inspire (I had a bathroom moment with then-state representative Maxine Waters! Yes I did! All right, she was applying lipstick in the mirror and we chatted a bit as I washed my hands. But still!).  The thing I’m most proud of is the multiracial tutorial project we conceptualized, funded, and launched in our local schools that continues to this day. These are just a few ways we took up Dr. King’s mantle locally.  LOVE–JUSTICE–PEACE: these were the words that encircled a photo of Dr. King’s face on our group’s button. What with there not being digitized logos at that time, or Facebook likes, physical buttons on backpacks and lapels were the thing you sported to show your allegiance.

I saw that button on the cork board of my son’s Kindergarten teacher, over twenty-five years later, and thought: hot damn.

Above is one of my favorite photographs of Dr. King. Given the year and the setting (a jail), I think we can be fairly sure this was not just any jail, but a Birmingham one, and that the text being passed was one which included Dr. King’s now canonical letter.

For further local reading: two past Dr. King-themed LD posts: A King among men, and It is the law of love that rules mankind.