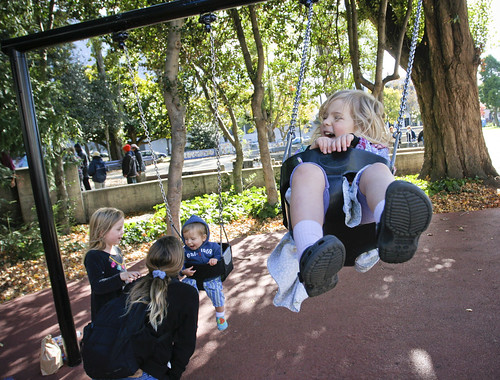 Special Cousin and Special Auntie dote on the lil’ peanut, while the lil’ monkey takes flight.

You just never know, is the thing.

Ever so many years ago I was a college freshman, worried on the one hand about living away from home in a big smelly student co-op, yet thrilled on the other by the sensation that I was at the center of my very own intellectual and social super-nova. Non-conformity, I found to my delight, was not only not something to be ashamed of, it was actually worth cultivating.

Lunchtimes at my high school, by contrast, I’d often eat alone. I would pick my way carefully to an out-of-the way spot I’d located between two buildings, behind the cover of some ferns, down against the building and beneath a window where I could read and eat my turkey sandwich and drink from my small milk carton in peace. I’m not sure which I sought out more earnestly: the quiet, or the concealment of my solitude.

But when I came to college, not only was I a fish finally in water, but the water was an ocean, not a pond, and there were species of fish I had only read about in books, and there they were, wriggling right past me, dazzling me with the sunlight bouncing off their scales!

I met two young women in my student co-op the fall of my freshman year who would eventually become family to me. One was my first love. With the notable exception of our breakup, we’ve each held one another through our most difficult life passages, and will continue to here on out. Another is Special Auntie to my children. Without my connection to her, my beloved’s and my children — or rather, these quite specific children — would not exist.

All we knew back then in 1980 was that we were drawn to each other; knew we had to get to know one another and become friends. I quite doubt we would have imagined the years our friendship would span, once we realized we were indeed forming one over the course of various late-night conversations in one person’s room or another. Following college we would endure separations by contintents or half-continents, and the better part of a decade. Later, we each returned back to where we’d begun, with different kinds of partners and different kinds of graduate degrees, but each with more wrinkles and wisdom. The love and kinship faded not a jot; in fact, it had only seasoned and deepened.

We began to meet regularly for coffee, and she’d bring along her younger daughter, then a toddler, who oftentimes obligingly napped while we swilled our lattés and talked. Most of the time her daughter was awake, though, and she would entertain herself, singing silly songs, telling jokes to herself (or us), playing with something or another that my friend had brought along for her. Eating madeleines. Sometimes we went to a nearby city park and talked some more as she played. And there she was, all that time. Swinging back and forth, back and forth. Being my future children’s future Special Cousin. Being a little fairy, trailing sparkly wisps of hope behind her as she moved, visible to anyone with imagination enough to see.

5 thoughts on “Happiness is an old friend”