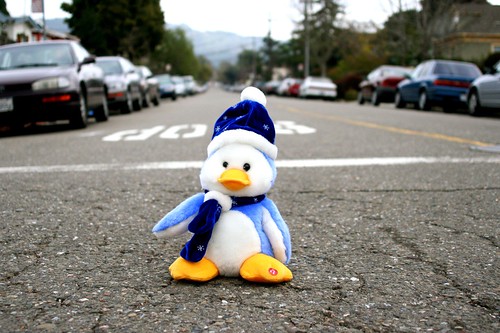 Oops! Left the singing penguin in the middle of the street again!

I am still a novice at this parenthood thing. As a result, many aspects of the gig that are quite familiar to you vets out there are still fresh to me. Such as for example the sado-masochism that can be at the center of a lot of this business. Sometimes the kid’s the sadist, and yes, sometimes the parent is. And sometimes some external force is the source of the sadism, and one party, let’s say the kid, is loving it, and another party, let’s say the parent, is in living h-e-double toothpicks.

Absolutely every battery-operated, music- or sound-generating toy is a ticket to h-e-double toothpicks for most (hearing) parents with anything other than steel-encased nerves. Which is why the only people who purchase these abominations are those who either:

a) Don’t have young kids around the house, and don’t understand what all this fuss is about, or

b) Used to have young kids around the house and have now forgotten the havoc something like this can wreak, or

c) Used to have young kids around the house, know exactly what they’re doing, and mean to exact some kind of sick punishment on you for any number of reasons, either transparent or long-buried.

To be charitable, my beloved’s father is probably in the middle camp. He’s not a malicious man. He might as well be, though, because he bought the item pictured above for the children of the household (which in its extended state includes our niece and nephew downstairs).

When the little musical note icon (located conveniently on the left foot) is pressed, this creature taps its toe, wiggles its wings, and commences to offer up a palsied version of “Santa Claus is Coming to Town.” By now, over a week into the ordeal, the batteries are beginning to wane, and it’s sounding more and more like the computer Hal, in 2001: A Space Odyssey. Remember Hal? At the end, when Dave unplugs him, he starts to trip, and sings a sad, sad version of “Daisy Bell” [a thousand thanks to Xah Lee]. Right now, the adults around here aren’t sure whether the Hal-ification of the demon penguin (or DP) mitigates or accentuates the torture. The only thing we’re in agreement on is that it’s torture.

We’ve worked something out, though. We give the various kids an opportunity to take their “turn” with the DP. So today it’s our turn, and we hope that tomorrow it’ll be the downstairs kids’ turn. Though my beloved and I can be forgiven, I think, if from time to time we “forget” and leave the DP downstairs on “our” days.

I’ve heard other folks come up with more appropriate solutions. You keep the song-singing toy in the trunk of your car, or in some other stash spot. Then when the kiddle is about to visit the friend or relative who sicked this toy on your otherwise peaceful household, you shove the toy in the kid’s hands for extensive enjoyment in the friend or relative’s company. And because it’s been stashed for a while, it will have built up even more cachÃ©. You can be sure it’ll be played ’til the batteries run out. So make sure to keep a spare set of batteries on hand, for the next visit.

If you want to see just how very much more worse it could all be, read this choice ditty from Dooce about “Gran Mal Seizure Elmo,” and don’t forget to view the video at the end.