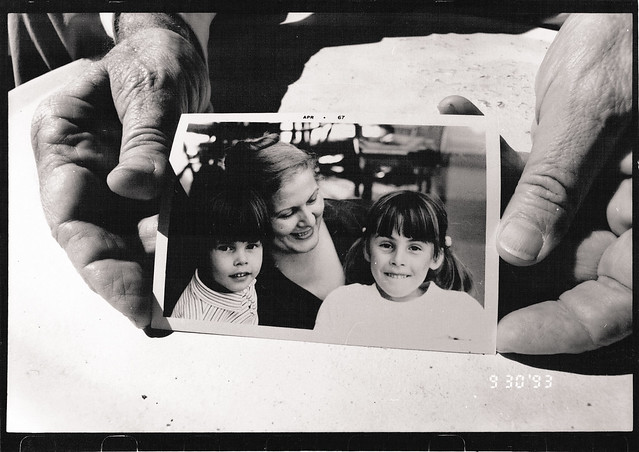 The summer of 1993 I was slowly adjusting to a breakup (not my choice; the axe fell just outside a Lesbian Avengers meeting in NYC).   My mother spent that summer in a convalescent hospital, ostensibly healing from first one, then another bone break earlier that spring. She was a heavyweight and older woman, unaccustomed to advocating for herself anywhere as fiercely as she advocated for others.  These were the reasons, I decided later, that no doctor had valued her body enough to thoroughly examine the x-rays of her bones as of her first bone break.  She had had a double mastectomy just three years before, and the bones that broke (we would find, posthumously) were textbook bones for a breast cancer metastasis in a woman her age.

My sister and I had been alternating time back home in the Bay Area with our mother that summer.  After an alarming incident at the convalescent home, my sister had decided, rightly, that our mother was receiving substandard care there. So she brought her home. In early August, in time for what would be her last birthday, I returned to the Bay Area.  We commenced to care for her in the way she deserved, trying to set up our recently retired father with the support he would need to oversee her care when I would return to my Minnesota graduate program and my sister returned to her Norwegian oil industry job.  A metastasis hadn’t occurred to any of us more than subconsciously, and since she had been seen by doctor after doctor, we had assumed (again, subconsciously) that it was ruled out. But by early August our mother was getting no better; when she couldn’t do the simplest of crossword puzzles and began to falter for the end of a sentence, we began to suspect a stroke.  We took her to the hospital for an explanation.

As she lay slipping into a coma, at what was to be 10 days before her death, the neurologist told us what we should have known as of spring. He hadn’t found evidence of a stroke, and looked to the rest of her medical record for a clue.  Examining the x-rays taken that April, he found lesions all over her bones, indicating what was probably a Stage IV metastasis even then. But no medical professional had bothered to to look closely at those x-rays in April; my father, the only family member in California at the time, didn’t think to question the medical professionals or insist on their ruling out metastasis. Neither did my sister and I, from our distance of 2,000 or 5,000 miles away.   Our ignorance about cancer in general, and breast cancer metastases in particular, could have filled a gap much greater distance than those miles.  Not so much anymore.

It wouldn’t be the first, and it definitely wasn’t the last, but my mother’s dying brought certainly the most defining of my life lessons in personal impotence. I was powerless: there was nothing I or anyone could do to bring my mother into consciousness, much less reverse the course of the cancer.  Even a scrap of consciousness, now that we knew she was going fast, would be invaluable: moments during which she could tell me the names of this or that family member in old photographs. Or perhaps tell me that it was okay, after all, that I was a lesbian. Or perhaps, even just tell me: Good-bye.

Sunday afternoon, August 22, 1993, was the last moment she opened her eyes and focussed them on me. She looked at me smiling at her, and she smiled back.  My last direct gift.  Thereafter she only opened them again once more, a day later, to focus one wayward eye on my sister.  She had returned to Norway to attend to affairs there, and headed back to California as soon as the neurologist’s prognosis came in.  For what felt like an eternity, but it may have only been ten or twenty minutes, my mother trained that one eye on my sister.  I wonder now, knowing what later transpired in my sister’s life, whether my mother was giving her all the strength and love she could for the test that was yet to come.  I certainly hope so.

In the remaining days that August, I focussed on detaching as much as I could from what I couldn’t change. I concentrated all my energies into communicating with my mother on a mental-spiritual plane (one previously of only nominal interest to me, and now, all we had left). In my head, I would tell her that she was doing this (dying) very well, she was doing this (dying) very bravely; we would all find our ways, and she shouldn’t worry; we’d take care of each other as best we could. Which was true: we did take care of one another, as best we could, in the ways that we were able.  So long as we were able.

After my mom died, I went mute.  Where before I had been a regular journal-keeper, after my mom’s death, even written speech was too much.  My friend Barbara back in Minneapolis sensed this, and knew how vital self-expression was for me.  So she gave me (outright gave me) the money to buy myself a good camera.  I bought a 35mm Minolta SLR, with a prime lens (24mm, for all the activist documentary photojournalism I wanted to do). And then, before I left home, I took picture after picture of the things my mother left behind: her closetful of Lane Bryant dresses and muumuus; her bureau drawer filled with jewelry, coins, and other small objects in various small cardboard boxes; all her support hose; the thicket of medication bottles we’d arrayed on her bathroom sink, below the timetable noting what had been given, by whom, and when.

On the day I was to fly back to Minneapolis (where my graduate program and future lay) I took my father out in the back yard and had him hold picture after picture–all the images we had sorted through as we were choosing the one to go on her memorial card.  In the image above, he’s holding a picture he had taken over 25 years earlier, the one we all thought was most descriptive of the her we knew: radiant with mother-love.  (If you can’t guess: that’s me on the left in the bowl-cut and the boy-shirt; my sister’s on the right in pig-tails.)

I hadn’t fiddled around with the camera long enough to know how to deactivate the automatic timestamp on the images.  This was a good decade before digital SLR cameras became more widely available, particularly at prices palatable by non-professionals, so this was analog film.  It wouldn’t be until the negatives were developed that I’d find that I had left the timestamp on all the pictures I had taken back home in California.  I printed all the black and white pictures myself back at the University of Minnesota’s campus darkroom, and when I saw this date, I contemplated trying to burn this one in somehow. Didn’t work.

Ultimately, I appreciate the reminder. It’s like a little digital scar. And it doesn’t mar the look on her face. Nothing could.