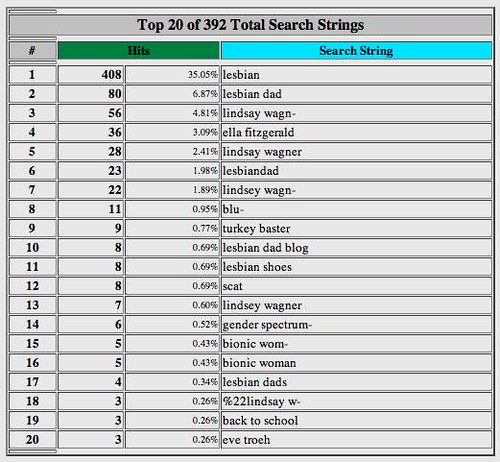 I may just have to make an end-of-the-month habit of this. That is, if it proves of any entertainment and/or educational value. Behold, above, the search strings that brought various bedraggled souls, possibly even YOU, dear reader, to this place.

I look at the various blog stats from time to time, as my late-night computorial excesses allow (search strings, referring agents, what have you). A good 75% of the data, I’m not quiiiite sure what it means. But I think I have a grip on the search strings.

Sometimes what brings folks here is positively wacky. There was a time there when, kid you not, Aztec warrior or something like that hauled in hapless readers by the dozens (because of this). Legions of high school kids on the hunt for cribbed info to pad a report due the next day stumbled into this blog. And what do you think they did next, after they dusted themselves off and saw where they were? Actually move on to consult a reputable scholarly source regarding Aztec warriors? Or twiddle around here a while, ’til they heard the tell-tale footfall of a parent in the hallway?

Now that the Aztec warrior mania has cooled, and it’s all about the bionic woman. That infernal imp Looky,Daddy made reference to Lindsay Wagner once, way back, in a comment. (Here. I’m not saying I didn’t take the bait, but he started it.) I’m sure the reappearance of cybernetic action chicks on the small screen has prompted the Lindsay Wagner nostalgia, and I for one hope it helps get Ms. Wagner off her sleep number bed and into at least a decent after-school special.

Ella Fitzgerald, well. She is so, so, so more classy than these digs, I don’t even know why my one reference dragged anyone over here. Says more about search engines than Miss Fitzgerald or this lesbo bon mots depot. But I tilt my head back and let the stardust sprinkle on my cheeks nonetheless.

Lots of the other search string dealies actually seem to be roughly on target, for which of course I’m grateful (by my calculations, a good 92 folks hit the bull’s eye!). Lesbians. Dads. Shoes. Scat. Turkey basters. You’ll find that stuff here. But I’d hate to have someone rummaging around for Thespian Cads or Caspian Fads and bump into this thing. Sure to disappoint. Unless you’re a procrastinating high school student, in which case, pop another bowl of popcorn and set a spell! There’s a lot to catch up on!