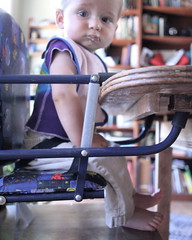 Otherwise known as the FD+ORS. Beta-tested on child 1, now polished to near-perfection with the peanut. [Caveat: this FD+ORS is applicable during the series of weeks/months between when the kiddle starts to eat spoon-delivered solids, and when said kiddle can reasonably direct spoon to food, then to face. Their face.]

First, to the setting. Note, in the image above right, that the child is parked at table in a portable baby chair designed for use in restaurants. Floor space is at a premium in a domicile such as ours, in which the kitchen, dining, and living areas all share a room of fairly modest proportions. Dual purpose objects are a must.

The observant among you will have already deduced that when the bairn is away from table, the device can be folded to the size of a tote bag and easily stashed, thereby allowing the space to be REPURPOSED as a Grown-Up Eating Area. Provided, of course, the grown-up is okay with a patina of schmutz covering the table in a baby’s arm length semi-circle.

Any seating device will do for the FD+ORS, of course. This just happens to be ours.

Next, assemble before you and your seated, hungry kid, the following tools:

moistened little towel/rag thingy with which to wipe face between bites (kid’s face, that is. unless you live in a hot, humid climate, in which perhaps you might prefer to use this on yourself between bites.)

be authentically part of the food prep/delivery system, as “toys” are shunned and the whole point, after all, is that the little one wants to explore the Real World, not a substitute for it)

Ideally you’ll have at least four items which can be fiddled with and then shoved off the table by the kid like a shuffleboard puck. In one test this afternoon, I found that four fiddlable items bought me between thirty seconds and a full minute between “fetches.” Hey don’t laugh; that’s good. 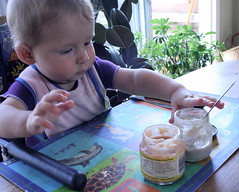 Now, to the Food Delivery. Whilst feeding, take care to keep food jars or bowls or what have you out of arm’s reach. (The kids’ arms. If they were out of your arm’s reach, that would change the whole ball game.) The image at left is an example of a FEEDING DON’T. The worldly-wise among you know exactly what’s about to happen in that image, and it ain’t pretty.

A FEEDING DO, however, would be to keep authorized decoy objects within (kids) arm’s reach to occupy the kiddle, lest the kiddle direct her/his idle attention to the out-of-reach food jar, and irrevocably fixate on it like it’s the frickin’ Holy Grail. Which you know they will.

The kid will either ram the authorized decoy objects into her/his mouth, or shove them off the table. We’ll get to the shoving later. But the time taken with the ramming buys you time to ram your own food into your own mouth. Do so, but keep one hand (your “wet” hand; see below) ready with the loaded spoon. Wait patiently for intervals between the authorized decoy object ramming. Patience is key here, as it is in soooo, soooo many matters related to child-rearing. They smell impatience on you like dogs smell fear, and their recognition that you’re impatient will rarely, if ever, work in your favor. When the moment avails itself, and the wee mouth is both free of extraneous objects and ajar, positively ZIP the loaded spoon into the mouth. In n’ out with surgical precision and lightening speed, that’s the best. I even scare the beloved when I do this, since I am so painfully slow at almost everything else.

Of course, I should add that most people do the “shovel-swipe,” wherein they first ram the loaded spoon into the ajar baby mouth (with an uptick at the end, against the inside of the upper lip, to be sure to deliver the goods and not half-pull them back out again), and then rapidly follow up with a run or two of the spoon along the adorable baby lips to scoop up the extree that will have not made it into the mouth. At first this looked too picky to me, but I have to say now that I’m a convert. If you’re flawless with the in n’ out, though, you only need to do the follow-up swipe once every half-dozen spoonsful.

Now there’s a spirited debate over whether one should wipe the face between bites or after the whole shebang. (This is above and beyond any debate over the “shovel-swipe” technique.) It’s a kind of Ford vs. Chevy, paper vs. plastic kind of thing. People feel strongly. I’ve wavered between both techniques, but am currently favoring the between-bites wipe.

Once, when we were eating with our downstairs family, the Know-It-All-Brother-In-Law’s wife noted how tidy our lil’ peanut was while I was on the job. “See, see how she wipes between bites?” she said to her spouse, with more than a slight tone of accusation in her voice.

To which the KIABIL said, “Yeah, well she’s a better dad than me.” I don’t think I am, but I appreciated the props. He’s of the Lather Them Up With An Ear-To-Ear Coating of Food, Then Wipe It Once At The End And Be Done With It school. Many people are; I’d wager most of them are Dads of one ilk or another. It’s a brave row to hoe, and I find I’m just not up to it like I was with kid #1. I think age is bringing out the OCD in me. But that’s another story for another day.

I might also note that parental mental health is greatly abetted by keeping one hand “wet” and another hand “dry.” (A) So you can do something with the “dry” hand like answer the phone or take pictures of your kid, and (B) so you can feel as if you haven’t given your whole entire existence, all the way out to your extremities, over to the bedlam that is life with an infant.

Now to the final flourish of the FD+ORS: the Object Retrieval System. You will inevitably be collecting items on the floor. How, and how many times will you “fetch” them are the only questions. Many parents limit the number of times they will “fetch” a dropped item. Yet this sets everyone up for melodrama, since once s/he’s surpassed the allowed number of drops, the little one will still harbor the desire to explore the exquisite combination of her or his budding motor skills and the properties of gravity.

Plus, recall that you want to have some device to buy you time to ram stuff in your own mouth. So in my view the net benefit outweighs this annoyance. When the kiddle’s of an age when s/he understands language, you can draw ominous connections between items purposely dropped from table/high chair during these months to the loss of later perks such as access to the family station wagon on dates, say, or college tuition support. But I think it’s a little to early for that at this stage.

Once your half-dozen decoy items have been littered on the floor around the kid, it’s time for Baba’s Little Helper, the object formerly known as wire coat hanger, demonstrated below in its overhand, sidearm, and underhand applications:

In essence, you are scootching the detritus to within arm’s reach, ensuring you don’t have to move your tired butt off the chair to go pick it up.

A hack on top of this could entail your wrapping a balled up mass of duct tape (though “duck” tape would do too) towards the end of the Baba’s Little Helper. Then you can extend the mealtime fun by wacking the object countless times until you get enough “stick” to be able to pull it up without even having to bend over to pick it up off the floor. The disadvantage here is that, if your brain is anything like mine, the wacking part may be too much fun and distract from the feeding of the child. I would suggest this hack only for those with strong self-discipline.

Et voilà! Simplicity itself. Bon apÃ©tit.
Your results may vary.

On top o’ the world