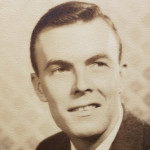 Dad died a week ago today, at 92. What follows is more hagiography than exposé; forgive me. Many factoids are wobbly around the edges. This is just my own vision. If you knew him, you may find much familiar, but I’m sure your mileage will vary. Also many of these are more anecdote than “thing.” As a result, this is the longest post I’ve ever published here, so it’s divided into five discrete pages. For the rest of the month, if and when I post,  I may just publish Pops stories from the LD archives. Ninety-two years here, with a generous surplus in the “love” column: it’s the least I can do.

92. Dad was born in 1921 in Seattle, Washington to Jessie Harsha and Edwin Pagenhart.  His mother hailed from the Ohio River Valley (her people were Scottish and English), his father from the South Dakota prairie (his people were German immigrants). They each skipped the small towns they grew up in for thrills far afield.

91. His family was in Seattle because his father was captain of the U.S.S. Lydonia, a survey vessel for the U.S. Coast and Geodetic Survey, and he was charting the Alaskan coastline in the region of Ketchikan. Not long after he was born, Dad’s family relocated for a short while to Berkeley, about a dozen blocks north from where I live now. Thereafter they returned to Washington, D.C. and Chesapeake Bay, MD, places Dad would as likely consider home as any.

90. Either the greatest number of years or the most memorable ones of his childhood were spent in Manila, where his father directed the mapping of the waterways around the Philippine Islands for the Coast Survey. Here is his earliest memory, as he jotted it down in one of a multitude of unfinished wisps of autobiography:

The only thing I can remember on my own during those Manila days before I was three: looking eye-to-eye into the face of a Filipino girl or boy from the back seat of our car as we passed the big open front window of her house (nipa), must have been stopped for a moment because we looked straight at each other. She was resting on her arms and we only stared in casual close glance about three or four feet from each other as the car moved onward. That’s all I recall of my first memory of the living world. But it took place just at the end of Dewey Boulevard [ed note: since renamed Roxas Blvd] as Manila turned into the Filipine suburb of Pasay and the road became dirt instead of pavement… auto traffic continuing south had to make its way along a winding street between houses of Filipine nipa and bamboo construction so it would explain a sudden slowdown in driving, allowing me, held in someone’s arms and looking out, to gaze into the calm face of a little girl returning the gaze.

His family returned to D.C. for a number of years, but were back to Manila again in the mid-1930s.

89. He has outlived his younger and his older sister, each of whom were very dear to him, in very different ways. Younger sister first: cancer. Older sister only just last year.

88. Every day when he returned home from his younger sister’s bedside during her short, intense cancer decline, he would walk in the door, put down his things, sit down at the piano, and play song after song, as if he were Scheherazade’s accompanist, each new tune somehow keeping his sister alive another day. He steadfastly held out for a miracle (literally: a “miracle”) up until the 11th hour. “Hope springs eternal” being his operable motto. Duly noting: this was the first family cancer death of three, each as close as possible to him.

87. When he was a child, he and his sisters had their piano practice in the early morning hours. His older sister practiced in the first slot, then him. Then his little sister. Every morning, a half an hour of piano practice, before breakfast.

86. Some years back, I took him on a tour of his old neighborhoods in Manila from the comfort of his couch, courtesy Google Maps’ street views and my laptop. He could name the school he attended, their home address (1325 Gral Luna), the works. And then see what they look like now. He was as amazed at the available visual record as I was at the accuracy of his long-term memory.

85. His father retired from the Coast Survey in the mid-1930s after contracting jaundice (I think?). Whatever it was, I have the sense that there was a tropical disease-related health thing that finally ended his working life as a ship captain and map-maker when he was in his 50s. While his father buttoned up his work in Manila, Dad and his mother and sisters travelled by train overland up to Peiping, as the city’s name was then written (later Peking, now Beijing). It was during a period of great internal strife, with Civil War still ongoing between Nationalists and Communists, and Japanese invasion on the horizon, amidst “incident” after “incident.” Dad remembers being told by his father to watch over his mother and sisters on the trip, what with him being the man of the family (he was then 14 or 15).  They left Peiping for Kyoto, and from there to San Francisco’s Governor Hotel in the Tenderloin (it’s now Antonia Manor, Section 8 senior housing).

84. Dad’s father, having grown up in the wind-swept hamlet of Wessington Springs, South Dakota and having surveyed up and down the Pacific Coast and the  Philippine Islands, was ready to retire in an ideal climate. He pored over maps and studied annual high/low temperature and humidity records to determine the perfect place to retire.

83. His father decided the the most temperate locale would be Santa Cruz, CA, and he bought acreage on the top of a hill overlooking Monterey Bay, next to the Powell family cattle ranch (later to become the University of California, Santa Cruz). It was the first property he ever owned after 50 years of “gub’ment” work. While his father worked with local hands to build the place, Dad’s family stayed at a hotel – Piedmont Court – at the bottom of High Street. It’s still there today, though it’s no longer a hotel. Nearly every time my family passed it on our many trips to visit his folks, Dad would point out the building and tell us about how they lived there when my grandparents’ place was being built. My kids now tell me how many times I repeat references to points of family historical interest in Berkeley. Like father, like daughter.

82. My dad ostensibly helped build the roof. His Uncle Clarence came out from southern Minnesota to help with the foundation, but legend has it that when Clarence arrived at the inordinately temperate Monterey Bay, he wheeled around and boarded the next train back to Minnesota, panicked that his crops needed to go in because of the early spring.

81. At Santa Cruz High School, Dad participated in the Science Club, the Spanish Club, Hi Tow Tong (a “secret” boy’s honor society), and the scholarship society; he served on the staff of The Trident (the school newspaper), was Commissioner of Publicity, and Manager (note the role) of the lightweight basketball team.

80.  He graduated from Santa Cruz High School in 1938, with a number of Japanese American classmates who would, not many years later, become interned.

That boy in the blue sweater is a girl

16 thoughts on “Ninety-two things about my dad”