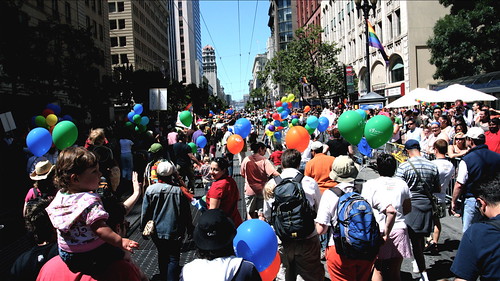 Ah, Pride. Hot sun, cheering crowds, thumping disco beats emanating from jumbo speakers on flatbed trucks and from a massive sound system installed in front of city hall. Lining and streaming up the street are old and young, lesbian and gay, bisexual and transgendered. Locals and tourists. Drunk and sober; clean and sober. Been there, done that attendees. Been there, done him, and him, and him attendees. Never been there before attendees, who can’t wait to do anything a’tall. The heartwarmed and the heartbroke. The bursting with energy, and the utterly exhausted. 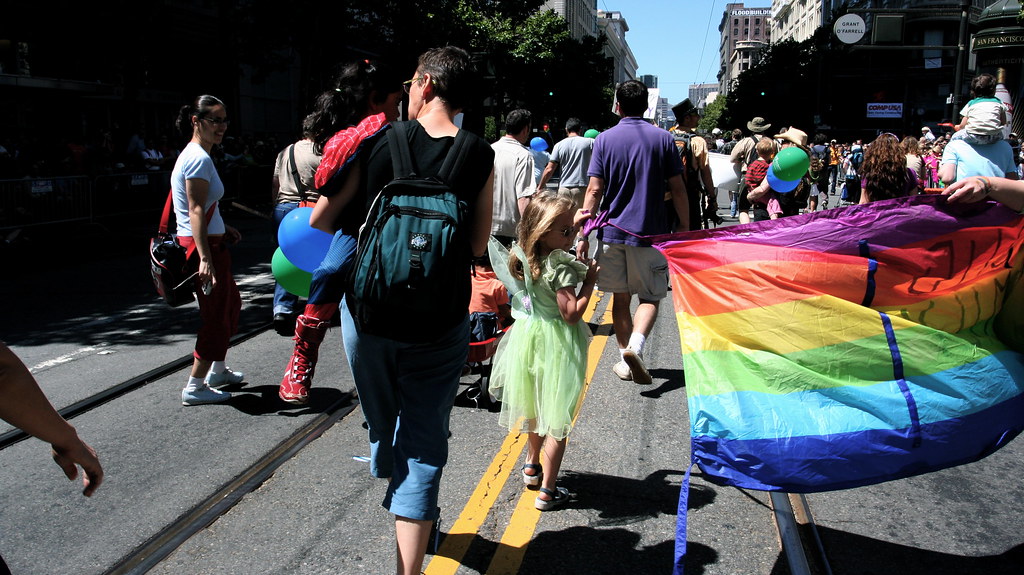 For us parents, Pride is now accumulating new layers of associations: Kiddles in their favorite Haloween costumes, our in-front-of-the-house flags, taken down and flown with pride through the streets. 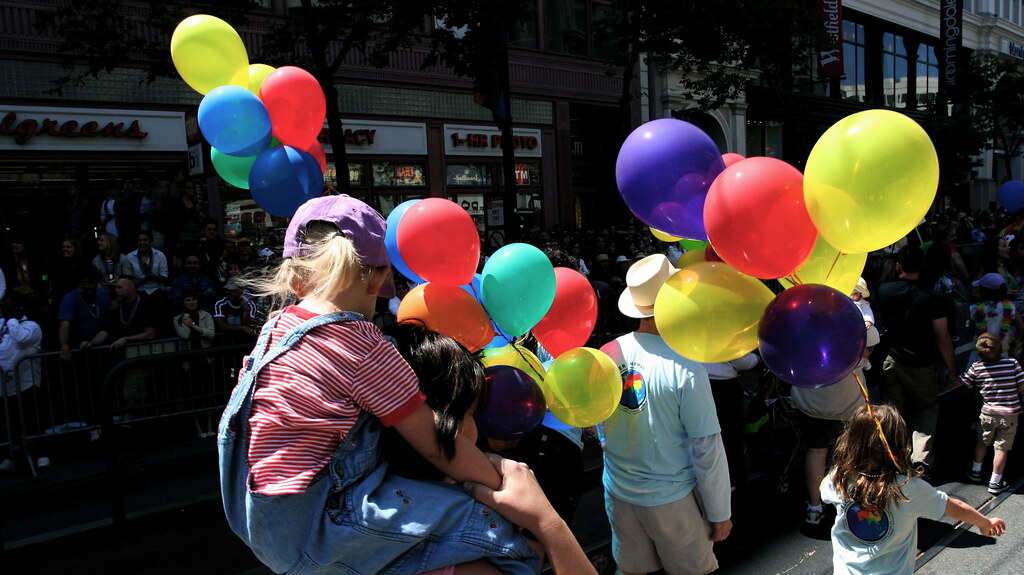 The hope against hope that the kids will be able to make the journey through the march part of it all without needing a diaper change. The hope that the arms will hold out. Baloons galore. 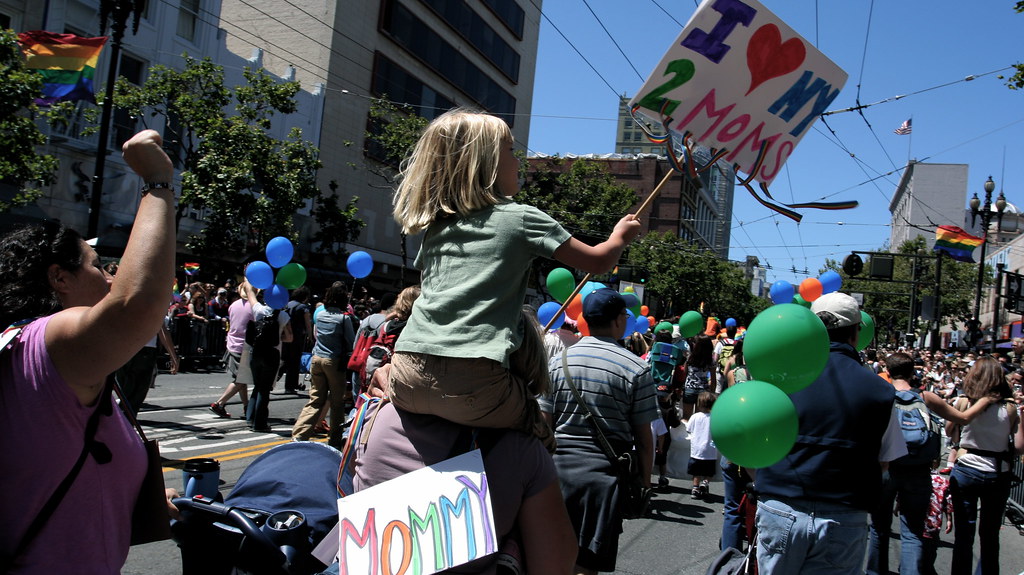 Hand-colored, kid-scrawled signs proclaiming the love of kids for their two moms, or their two dads; the phenomenal credibility of these sentiments, particularly when they are replicated up and down the fat city street for several blocks in either direction. Strollers (or wagons, or tricycles, or bikes, or scooters) got up with decor that only queer folk would think up. Impromptu schmoozing with familiar folks in the stroll past the cheering crowds. Sharing resources as needed from other parents: a band aid, water, essential snacks. 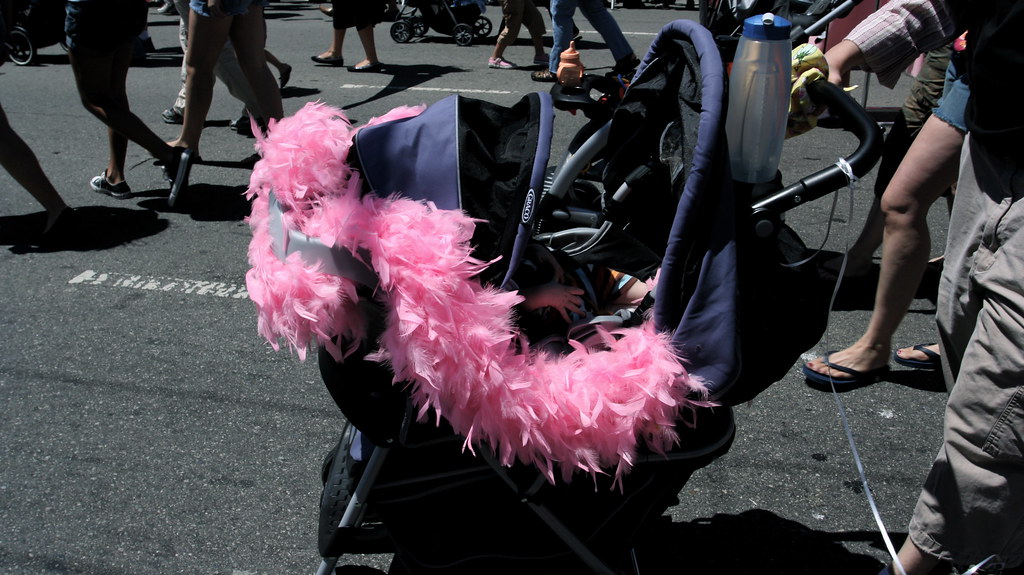 Depending on the city, a gnawing fear of getting the stroller’s wheel caught in the streetcar’s tracks (or the subway’s vent), as it is valiantly piloted wherever it can fit. 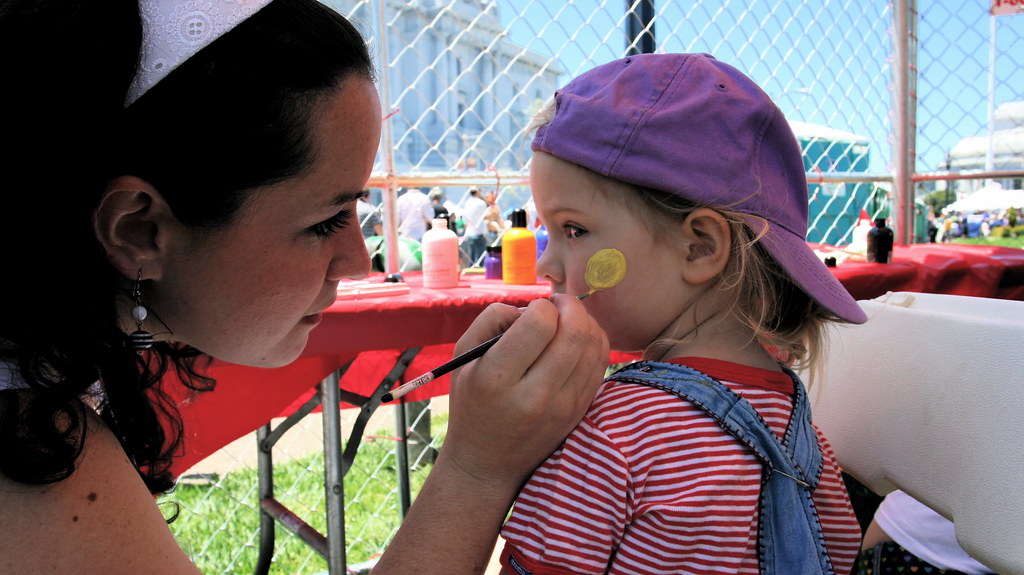 The kind, warm Big Kids from COLAGE painting up kiddle faces at the “Family Garden” haven at the end of the march. Or the Clown, our lil’ monkey’s highlight of the day, next after the Sister of Perpetual Indulgence whom she swore was Quan Yin, due to the yellow parasol, and who were we to convince her otherwise? 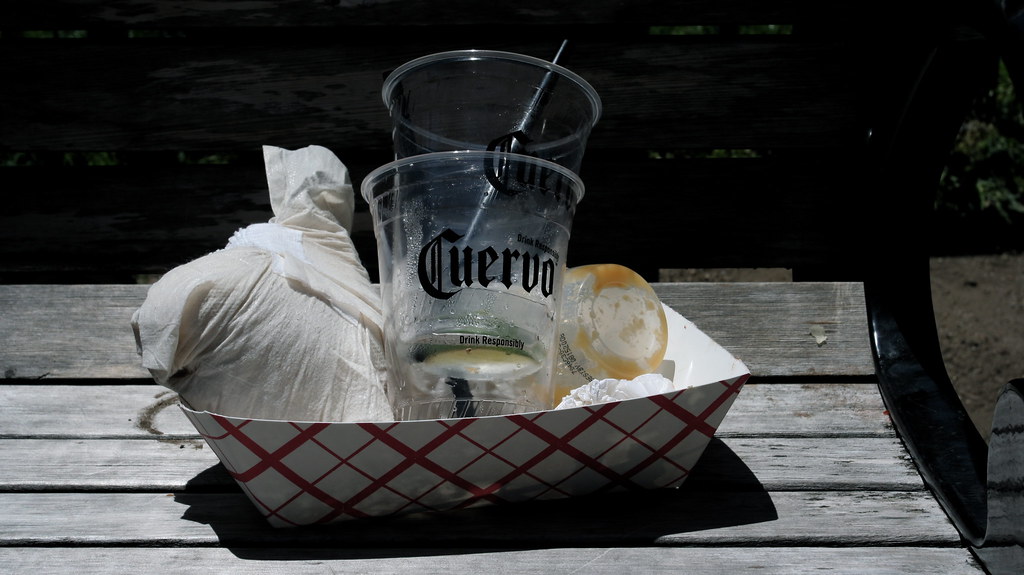 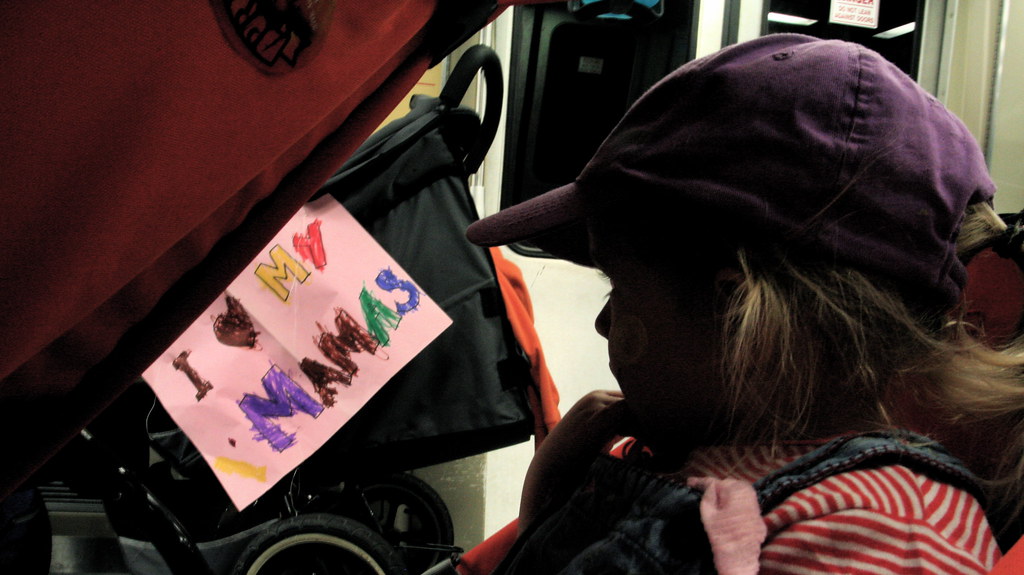 The tired (but happy) subway ride home. The speculating about whether the hullabaloo was worth it for the kids: questionable; depends on the age; will probably phase in and out. Speculating on the worth for the self: are you kidding? Even if you’re so exhausted you can’t stay up late and write down all the thoughts that have been occurng to you, it’s worth it. Has been for the past umpty-ump (for some of us, twenty-three) years, through various sweeties and none, through one political affiliation or another, active or dormant.

Until it feels this way, any day of the week, any week of the year — the relaxed sense of belonging, everywhere, that you have amongst your kindred on this day — you have to go. Majority status for a minority community, just this one day. Sip long and deep from this trough this day, so’s it’ll last you another 364.

5 thoughts on “And so it goes (Pride in glimpses)”