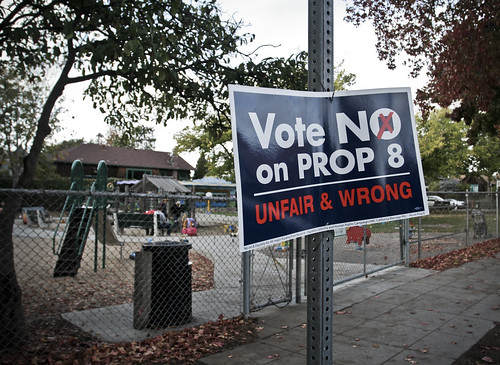 Outside my polling station at Totland, our kids’ favorite local haunt.

Being a pessimist is supposed to inoculate one against disappointment, but the dirty little secret is that we’re still disappointed.

Regarding the personal (denouement): Won’t be easy to come by for a while.  So much, too big, too sad.  So many worked so hard, to come so close.  All of which, so hard to process, amidst the blinding light of Obama’s triumphant win.  A dream deferred for 232 years, then come true.  Racial barrier broken at the highest point imaginable, and on the same day another barrier is erected at the most emotionally intimate point imaginable.

Also, regarding the political (denouement): so far as I know as of this point (wee hours between Wednesday and Thursday), No on 8 continues to await the final count of the remaining absentee and provisional ballots.  Out of some ten million votes cast, less than half a million (roughly 400,000) separate yes from no.  Some speculate (know?) that the counties from which these are expected had not otherwise “trended” significantly enough against the proposition that they would swing the election.  Regardless, No on 8 continues to wait for these results. [*see below for mid-day update, 6 Nov.]

Three law suits were filed against the proposition before the end of the day on Wednesday.  Covered at the Los Angeles Times here on 5 Nov., and also here at Kos, and here at Pam’s House Blend.  San Francisco City Attorney Dennis Herrera, filing one of the three lawsuits on Wednesday, says:

The issue before the court today is of far greater consequence than marriage equality alone … Equal protection of the laws is not merely the cornerstone of the California Constitution, it is what separates constitutional democracy from mob rule tyranny. If allowed to stand, Prop 8 so devastates the principle of equal protection that it endangers the fundamental rights of any potential electoral minority — even for protected classes based on race, religion, national origin and gender. The proponents of Prop 8 waged a ruthless campaign of falsehood and fear, funded by millions of dollars from out-of-state interest groups. Make no mistake that their success in California has dramatically raised the stakes.

Still to come: what we gained, even amidst the loss.  Along with abundant thanks to all you who lent your vocal support and your supportive dollars (US or Candian!) to the battle.  All that, when the numbness dissipates and the feeling returns to the tips of the typing fingers.

*[This just in: a final statement from the No on 8 campaign.  And this slightly longer one at EQCA.  So.]